He might not be a Chelsea player anymore, but John Terry is certainly keeping in touch with his former teammates, including Cesc Fabregas.

The defensive stalwart couldn’t help but comment on the Spaniard’s latest post which sees him locked in a loving embrace with his partner Daniella Semaan as they continue to live the life in Ibiza for their summer holidays.

Initially, it looked a straight forward dig at Fabregas and his fashion sense, and Terry poked fun at his shorts, which were incredibly small for a man his size.

It turns out that they’re made by Thomas Royall, a clothing company that the former England international is an investor in. A little plug that’s now doing the rounds on the internet with media outlets all picking up on the comment, it’s a smart business play from the 36-year-old who is still looking for his next challenge in football having become a free agent this summer.

Stop it John, you’re too much… 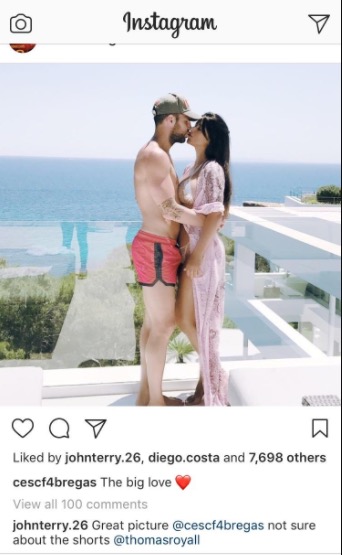