Given the world we live in now, the social media activity of footballers is under more scrutiny. Arsenal target Kylian Mbappe would be well aware of that.

However, that hasn’t stopped the Monaco starlet from sparking wild speculation with his activity on Instagram, with the 18-year-old being heavily linked with various clubs around Europe this summer.

One of those clubs is said to be Arsenal, with The Sun noting that along with Paris Saint-Germain and Real Madrid, there is a real battle to land the hottest prospect in European football who is valued at around £100m.

After bagging 26 goals and 14 assists in 44 appearances last season, coupled with his impressive overall play and football brain, it looks as though Mbappe is the real deal, and some eagle-eyed Arsenal fans are absolutely loving the fact that he is seemingly taking a big interest in some of the Gunners stars on Instagram.

After ‘liking’ an image posted by Alexis Sanchez last week, he went on to do the same with one posted by Mesut Ozil and has topped it all off by going for a third bite with a like for French youngster Jeff Reine-Adelaide, as seen below.

At first, it seemed a bit strange that Mbappe would even be taking an interest in the Arsenal youth star, but as the pair known each other from the French youth system, perhaps it is merely a case of just liking a friend’s post.

Either way, it’s got fans excited and the media talking, and with the summer transfer market yet to really kick into action, Mbappe’s future will be the main talking point for many in the weeks ahead. 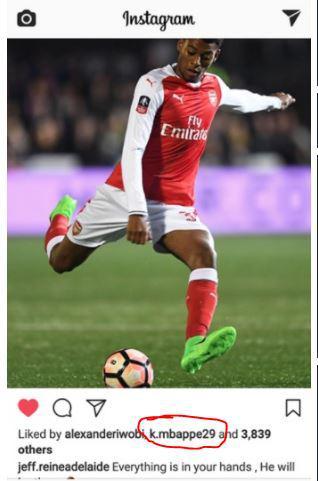