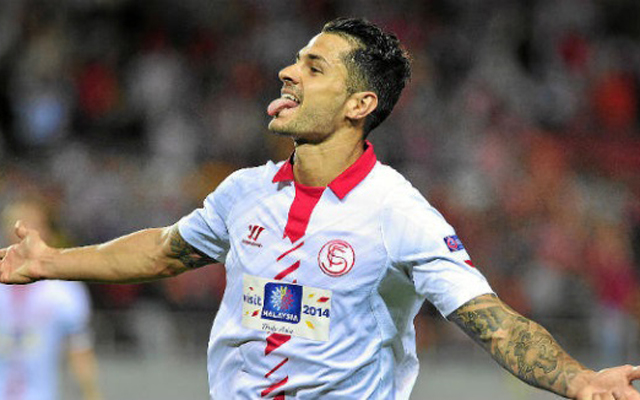 Chelsea boss Antonio Conte is reportedly considering a swoop for Sevilla winger Vitolo, with the 27-year-old having a £35m release clause in his contract.

There’s no denying that Chelsea need to add quality and depth to their squad this summer to be able to compete on various fronts next season.

Conte has in turn been linked with various key additions, with The Mirror now reporting that he’s considering a swoop for Vitolo, who could cost £35m if Sevilla hold firm and wait for his release clause to be met.

Although he’s won the Europa League three times and would be an important addition to the squad to release some of the pressure on the likes of Eden Hazard, it’s questionable as to whether or not Chelsea could do better with their money.

Vitolo scored six goals and provided 10 assists in 43 appearances last season, while the campaign before that he managed just five goals and 15 assists in 47 outings.

Those are decent numbers from the Spanish international, but as the report goes on to add, at a time when Chelsea are set to spend £35m on Monaco midfielder Tiemoue Bakayoko and £61m on Juventus ace Alex Sandro, there could be an argument that they should use their money more wisely than on Vitolo.

Further, it’s noted that Conte still wants either Leonardo Bonucci or Virgil van Dijk which could prove to be the most expensive signing of all, and so a £35m move for Vitolo is surely going to be questioned.

After a frustrating wait for signings to arrive in west London, it looks as though Chelsea are now set to ramp things up over the next week or so, as Conte will undoubtedly be hoping to have as many new faces in as possible before the squad leaves for their pre-season tour of the US at the start of next month.