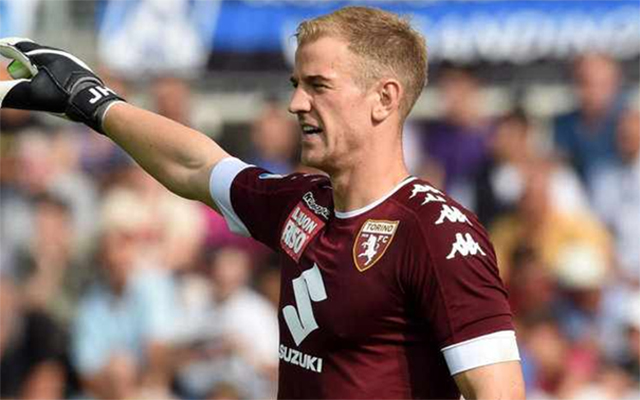 Man Utd are reportedly considering a surprise swoop for Man City goalkeeper Joe Hart, in the event that they lose David De Gea to Real Madrid.

The England international experienced an indifferent loan spell at Torino last season after being shipped out by Pep Guardiola who snubbed him in favour of Claudio Bravo.

Despite the fact that the former Barcelona shot-stopper struggled, it hasn’t opened up a window of opportunity for Hart to return to the Etihad, as Guardiola opted to sign Ederson last month.

In turn, that leaves the 30-year-old further down the pecking order at City and likely looking for a way out, with The Sun sensationally suggesting that a move across Manchester to Old Trafford could be a possibility.

It’s claimed that if the Red Devils see De Gea leave this summer, which remains a possibility as Real Madrid have reportedly revived their interest in signing the Spaniard in a whopping £60m deal, then they will target Hart as he’s specifically wanted by Mourinho to fill the void.

Nevertheless, it’s unclear as to whether he would be coming in to start as Sergio Romero impressed in the Europa League last season, and so perhaps Mourinho feels as though the Argentine would be ready to step up, with Hart coming in as competition.

What is clear as far as Hart is concerned though, is that if harbours ambitions of playing for England in the World Cup in Russia next summer, he has to leave City.

Guardiola evidently has no plans to involve him next season with Ederson and Bravo set to battle it out for a place in the starting line-up, and so a convenient short-term move to United may suit him. However, this is all speculative for now as United will surely do all that they can to keep De Gea given he’s established himself as one of the top goalkeepers in the world.