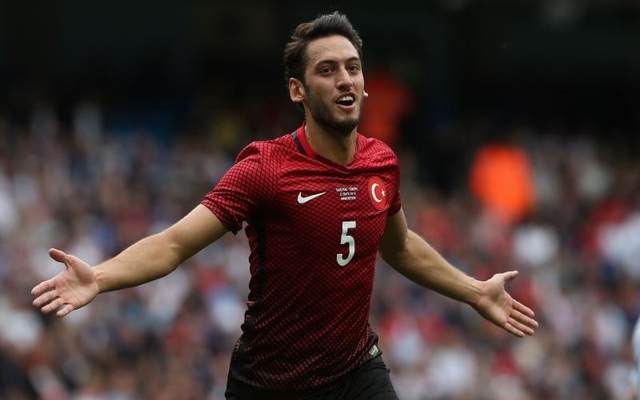 AC Milan are on the verge of completing their sixth summer signing after Hakan Calhanoglu arrived to complete his medical on Monday morning.

The 23-year-old landed in Italy on Sunday to undergo initial tests, but he’s expected to complete them on Monday and will sign his contract to be unveiled as a Milan player in the afternoon.

As seen in the video below, the Turkish international arrived at Milanello to complete the necessary checks, as he has already spoken of his delight to be joining the Italian giants.

While his threat from set-pieces is undoubtedly one of his stand-out abilities, Calhanoglu’s creativity and quality in the final third coupled with his versatility will make him an important addition for next season and beyond.

As reported by Sky Sport Italia, he’s expected to complete a €24m move, €20m plus €4m in bonuses, while he’ll earn €2.5m-a-year plus bonuses over four years.

In a world where some players are going for ridiculous sums of money, it’s another impressive bit of business from Milan, although his form on the pitch will determine whether or not it’s a successful one.

Elsewhere, MilanNews.it report that the next 48 hours will be crucial to determining Gianluigi Donnarumma’s future at the club.

As per Corriere della Sera, the expectation is that the 18-year-old will now sign a contract extension after initially rejecting Milan’s offer last month, which sparked a furious backlash from supporters.

It’s claimed that both Donnarumma himself and his family want to renew, with his current deal having just 12 months remaining on it, and now it will be down to his agent Mino Raiola to agree on terms with CEO Marco Fassone and sporting director Massimiliano Mirabelli with answers expected in the coming days.