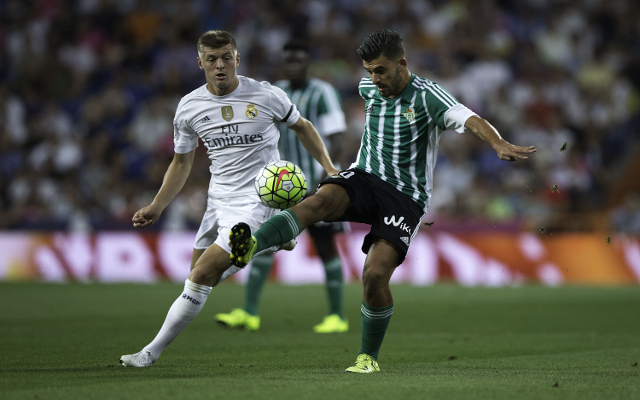 Barcelona are reportedly battling it out with Real Madrid over the signing of Dani Ceballos, while they have crucial work to do to sign a key pair.

Both Spanish giants are keen to land the 20-year-old, who recently impressed at the U21 European Championship and in turn has attracted plenty of interest.

As reported by Mundo Deportivo, he has a €15m release clause in his contract with Real Betis, but Madrid have tried to force their way to the front of the queue with a €20m bid.

Despite that, Barcelona remain confident of their ability to persuade him to move to the Nou Camp instead, and will continue to push to land his signature as the battle heats up between the two bitter rivals.

While Los Blancos have made the first move, this transfer situation is far from over and time will tell who wins the scrap.

Meanwhile, Mundo Deportivo also note that it’s a crucial week for both Gerard Deulofeu and Hector Bellerin, as Barca and new boss Ernesto Valverde really start work on their transfer business this summer.

After exercising the buy-back clause in his contract with Everton last week, the Catalan giants must now continue the process to re-sign Deulofeu, who will be offered a contract until June 2019 to make his return official.

The deal will cost them €12m, and it comes after the Spaniard impressed during a loan spell with AC Milan last season to suggest that he can provide stiff competition for the likes of Lionel Messi and Neymar, with Barca looking to compete on various fronts next season.

As for Bellerin, he’s expected back in London on Monday and it’s claimed that he’ll start work on leaving Arsenal by making it clear to the club and Arsene Wenger that he wishes to return to Barcelona, the club he came through the youth ranks at and left at 16.

It’s claimed that the Gunners are demanding €50m for the 22-year-old, but the Spanish outfit are hopeful that they can negotiate that price down as it may be out of their reach for the time being if they don’t budge.