Arsenal have reportedly agreed on personal terms with Monaco star Thomas Lemar, but they’ve yet to satisfy the demands of the Ligue 1 champions.

The 21-year-old was a pivotal figure in Monaco’s successful season last year, scoring 14 goals and providing 17 assists in 55 appearances in all competitions, as the French outfit won the league title and reached the last four in the Champions League.

In turn, it’s no surprise that he has attracted the attention of Arsene Wenger, with The Sun claiming that the two parties have agreed on personal terms at £90,000-a-week over a long-term deal.

That is a significant increase on what he currently earns and so from that perspective, it looks positive that a transfer can be done.

However, as added by the report, Arsenal have had two bids of £30m and £40m rejected, with Monaco said to be looking for a stunning £80m fee to allow a player that they signed for just £4m two years ago to leave.

It remains to be seen whether or not the Gunners can drive that price down as ultimately after spending a club-record transfer fee of £52.6m on Alexandre Lacazette last week, as per BBC Sport, they won’t be wanting to spend a massive amount again unless it’s balanced out with sales.

As for Monaco, they could be set to lose a number of key players this summer after already seeing Bernardo Silva leave, and so it’s understandable as to why they would try to price Lemar out of a move.

Nevertheless, the suggestion that he wants the move has been backed up by his Instagram activity, as some eagle-eyed supporters noted that he liked a post from Lacazette of posing with the Arsenal shirt, as seen below.

It could be innocent in that he’s just happy for his fellow Frenchman for sealing his move to the north London giants, but perhaps there’s more to it in that Lemar is keen to join him at the Emirates next season.

Time will tell if it’s the latter, but should Arsenal pull this transfer off, they’ll surely be considered serious contenders next season having added key pieces. 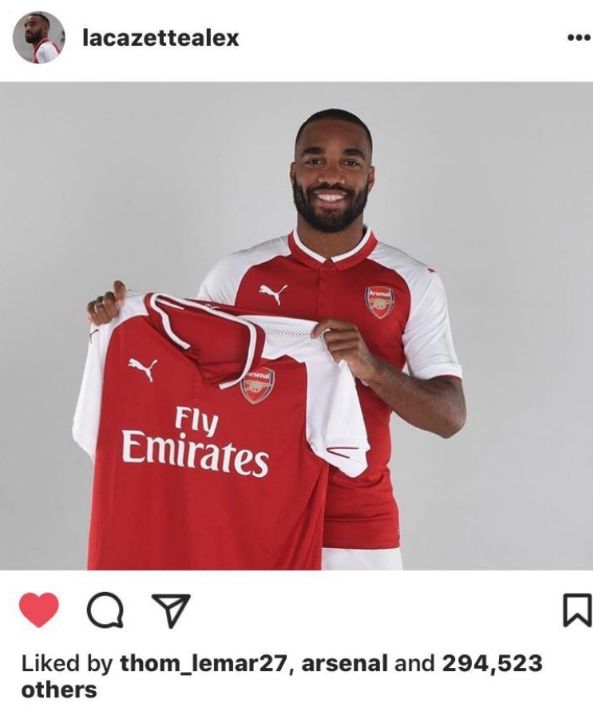