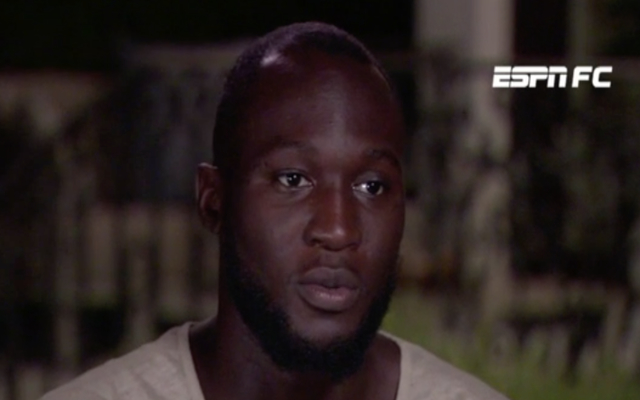 Romelu Lukaku has given his first interview since Man Utd confirmed that a fee had been agreed with Everton to sign him this summer.

While the move is not yet official, it appears as though it’s merely a matter of time before he is unveiled as a United player after the club confirmed an agreement is in place.

Having now given this interview, it’s safe to say that it’s all-but a done deal, as he sat down with ESPN to discuss his £75m move to Old Trafford ahead of next season.

“This is an opportunity that I’ve always wanted since I was a child. My mind was already set. I gave my word, and I don’t look back.

When asked why he chose United, he replied: “I would say, ‘Who would say no to the biggest club in the world?’ When [Manchester United] came calling, I didn’t have to think twice. So I’m really delighted to hopefully be part of their history.

“Best stadium in England. The best fans. This is the perfect opportunity. I always said I wanted to play for a team that’s challenging for every trophy that there is.

“[Mourinho is] a guy who I wanted to play for since I was 10 years old, so now to have the opportunity to work under him again is great.

“We’ve been in contact. He explained to me how the club was like, what he expects from me.

“You know, we were together under different circumstances. Obviously, the first time when I met him, I was still a young kid, and I was eager to play. And he understood my decision why I left at the time. I returned on the pitch.

“Now I’m 24. I’m a grown man. He sees the maturity that has grown throughout the years, so I’m really thankful for the opportunity he gave me again.”

All seems well for the Belgian international as he will play a fundamental role for Man Utd next season and beyond, as having struggled last season to score goals consistently in the Premier League, the loss of Zlatan Ibrahimovic will have only made the situation worse for the Red Devils.

However, they now have a prolific goalscorer to lead the line with plenty of room for improvement still, with Lukaku undoubtedly hoping to build on the most prolific season of his career to date last season and go one better this coming campaign with a better squad around him.

United fans will undoubtedly love hearing what he’s had to say, while it was also key to hear him speak about his relationship with Mourinho as the pair now prepare to work together again after their spell at Chelsea didn’t work out.