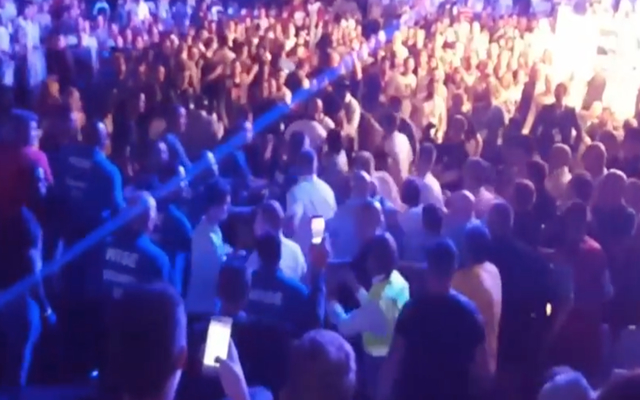 Crowd trouble at the Copper Box on Saturday night marred the boxing in the ring as a group of West Ham fans were involved in a mass brawl.

Fan favourite and West Ham fan Sam McNess was stopped by Asinia Byfield in brutal fashion in the fifth round of their contest, and Byfield perhaps stupidly decided to jump on the ropes and scream at the crowd while putting up the ‘Irons’ pose to rile supporters.

That led to the West Ham fans in attendance supporting their man McNess, some even in Hammers tops when the general policy at these shows is for no football colours to be allowed, to rush to the floor seats where they clashed with rival fans.

As seen in the video below, punches are thrown with some falling to the ground while various drinks and even a chair is thrown as things escalated and quickly got out of hand.

It’s clear that there was insufficient security in place as it look at least four minutes for stewards and security to cordon things off and split the two groups up, although smaller altercations continued until eventually the situation was brought under control.

BT Sport were forced to go on a prolonged advertisement break before returning to report that it was a serious matter, with promoter Frank Warren slamming the minority of troublemakers for ruining the night of boxing while also putting in danger younger members of the crowd.

Action will undoubtedly be taken, but aside from the fact that the fighting should obviously stay in the ring at the boxing, while this can’t all fall on the small group of West Ham fans involved, it doesn’t reflect well on their fanbase given their reputation having seen the trouble at the London Stadium last season.