It’s not the first time this summer and it certainly won’t be the last, but social media activity continues to lead to speculation, and this time it involves Liverpool.

RB Leipzig midfielder Naby Keita has been heavily linked with a move to Anfield this summer, although as noted by The Independent, the Bundesliga outfit are demanding a staggering £70m for him.

While the 22-year-old certainly impressed last season with eight goals and eight assists in 31 league outings, it’s nowhere near enough to warrant that kind of price-tag and it had led to suggestions that Liverpool would give up their pursuit even though he’d be ideal for their midfield.

Nevertheless, the player himself continues to fuel speculation, as seen in the image below where he has liked an Instagram post talking up a possible move to Liverpool. 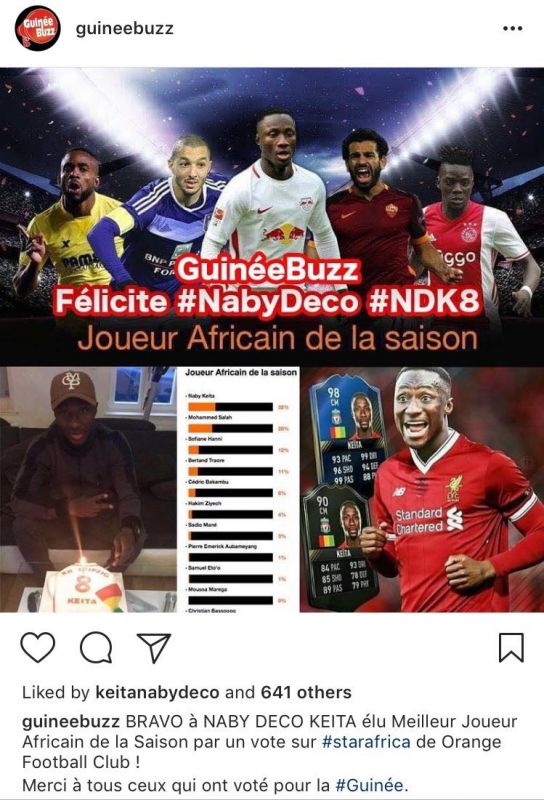 While this is obviously no indication or official word that he’s still on course to make the switch to Merseyside, it does give us an insight into his thinking and what he arguably wants before the start of next season.

However, time will tell if he does get his move to Liverpool, with Jurgen Klopp arguably now tempted into considering other targets instead.

Meanwhile, according to AS, Liverpool are keen on Atletico Madrid ace Angel Correa, and have even gone as far as to offer him a five-year contract worth €2.7m-a-year.

The Premier League giants would pay €28m to prise him away from the La Liga side to meet his release clause, but unsurprisingly Atleti don’t want to let him leave, especially with their transfer ban in effect until January.

In turn, it’s added in the report that the situation may change in the new year, and Liverpool may be well advised to revisit their interest in a few months time. Correa has nine goals in 58 league appearances for Atletico, while he has seven caps for Argentina.