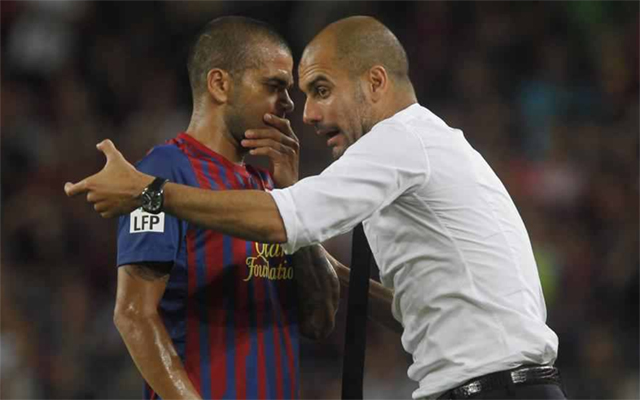 Man City boss Pep Guardiola is reportedly furious over missing out on Dani Alves, as Paris Saint-Germain offered double the wages City put on the table.

The 34-year-old left Juventus this month, and according to ESPN, had verbally agreed a two-year deal with City to reunite with Guardiola following their days at Barcelona.

However, it’s added how PSG then offered him a staggering contract worth £12m-a-year, which works out at around £230,000-a-week, and the French giants have called a press conference on Wednesday to unveil him as their latest signing.

City are said to have been unwilling to match that wage packet, and in turn Guardiola has been left furious with Alves for his late decision to snub them and move to Paris instead.

It’s added by ESPN that the Spanish tactician allowed him to take extra time off due to his wedding on Saturday, and the Brazilian defender was expected in Manchester this week to undergo his medical and sign his contract.

That in turn would have made him available to travel with City on their pre-season tour of the US, but instead Guardiola and City are now having to scramble to bring in other full-back solutions this week having let so many stalwarts go this summer.

Gael Clichy, Pablo Zabaleta, Bacary Sagna and Jesus Navas were all released, leaving Aleksandar Kolarov as the only senior full-back left in the squad. While they are still linked with various targets to address both positions, it will come as a major disappointment that they can’t call on Alves with his experience and winning record next season.