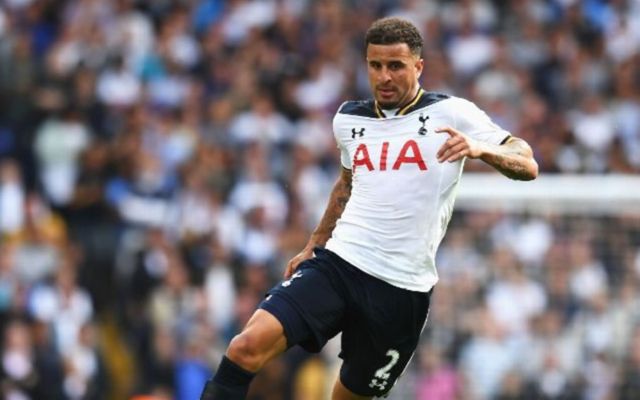 Tottenham are reportedly refusing to budge from their £50m valuation of Kyle Walker, with Man City still £10m short of that price-tag.

The 27-year-old has been heavily linked with a switch to City this summer, but as of yet no agreement has been reached on a transfer fee.

According to the Evening Standard, there is still a £10m gap between the two clubs as Tottenham want £50m for their first-choice right-back, while City have not bid any higher than £40m at this stage.

Further, it’s added that Walker will likely have no problem agreeing on personal terms as he’s in line to double his current £70,000-a-week wages, but he’ll have to wait for the two clubs to reach a deal first.

Given Dani Alves has now snubbed them for Paris Saint-Germain, it remains to be seen whether or not that has an influence on City’s pursuit of Walker, while Pep Guardiola will undoubtedly be desperate to address that area of his squad as he’s badly short of options at full-back heading into pre-season.

It’s suggested that City will eventually sign Walker, but ultimately it’s now a case of it dragging on through the summer as both clubs refuse to move from their respective valuations of the player.

If Tottenham were to receive £50m for Walker, they would surely celebrate that as a brilliant deal for themselves, as they’ll look to Kieran Trippier to be a ready-made replacement, with that £50m available to Mauricio Pochettino to invest and strengthen elsewhere.