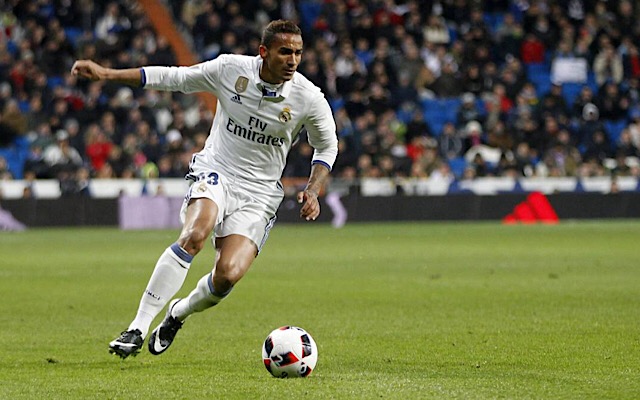 Danilo, the out of favour Real Madrid defender, has given Chelsea some much needed good news as he hopes to secure a move to the Premier League champions.

Antonio Conte’s side have endured a disappointing transfer window so far. Everton’s Romelu Lukaku was widely expected to sign for Chelsea before Jose Mourinho tempted him to Manchester United, whilst moves for Juventus’ Alex Sandro and Timoue Bakayoko have been painstakingly slow.

With Conte looking to reinforce his squad with Chelsea returning to the Champions League, the news that Danilo has urged Real Madrid president Florentino Perez to let him join Chelsea, according to Spanish outlet Diario Gol, will bring some hope to the Italian.

Danilo has failed to establish himself at Madrid, since joining from Porto in 2015 for £27.5m. With Real Madrid manager Zinedine Zidane as yet convinced of his talents, and having started just 17 La Liga games last season behind Dani Carvajal, Danilo has accepted that the time is right to move on.

The Brazilian international has been capped 15 times by his country, and is believed to have the ideal playing style for Antonio Conte’s 3-4-3 formation. Whilst Victor Moses impressed in the unfamiliar right wingback position last season, his dismissal for diving against Arsenal in the FA Cup final displayed his limitations. Conte remains keen on keeping Cesar Azpilicueta in central defence, and with the departure of John Terry, is keen for reinforcements to join pre-season training as quickly as possible.

Watford makes an offer for €8-million Palmeiras talent as they prepare for Premier League competition next season May 28 2021, 7:37
Watford FC

Video: Danilo fires home a rocket to open the scoring for Juventus vs Sassuolo Jan 10 2021, 21:06
Juventus

Video: Arsenal’s alternative to Thomas Partey shows his class with a dominant headed goal from a corner Jul 9 2020, 21:37
Arsenal FC