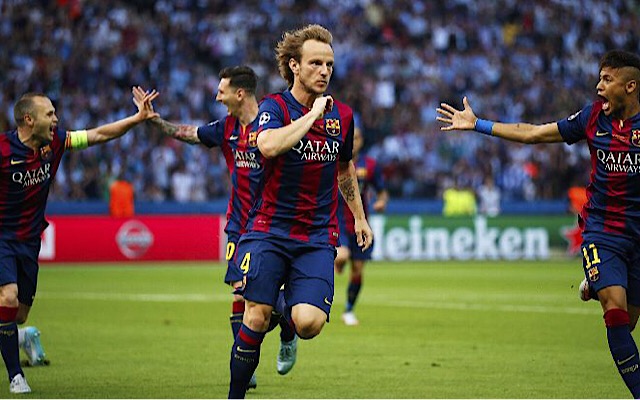 Man Utd have been put on alert with the news that Barcelona have agreed to sell Croatian midfielder Ivan Rakitic.

Jose Mourinho, the Man Utd manager, has been looking for central midfield reinforcements all summer, with prospective moves for Eric Dier, Nemanja Matic and Monaco’s Fabinho all running into difficulties.

Yet the news that new Barcelona manager Ernesto Valverde will agree to the sale of Rakitic, depending on whether Barcelona can tempt PSG to sell Marco Verratti, will have pleased the irascible Portuguese manager as he enters his second season with Man Utd.

With Verratti expecting to cost in the region of £75m, Barcelona have accepted they will need to sell Rakitic in order to finance the deal, according to Don Balon.

The bad news for Mourinho is that news of a possible Rakitic sale has alerted the free spending Italian side AC Milan, who have spent over €200m in recent weeks as fresh investment looks to bring the good times back to the San Siro.

Barcelona are likely to demand a fee in the region of £40m for the midfielder, who only signed a new contract with the Catalan club in March and who’s deal does not end until 2020.

Having signed defender Victor Lindelof from Benfica and Everton’s Belgian forward Romelu Lukaku, Mourinho has claimed his transfer business is “50% done” and will be looking to push forward any deal for Rakitic in the next few days.

With Man Utd returning to the Champions League following last season’s Europe League triumph, Mourinho is in need of reinforcements in midfield after sanctioning the sales of Bastian Scheinsteiger and Morgan Schneiderlin last season.