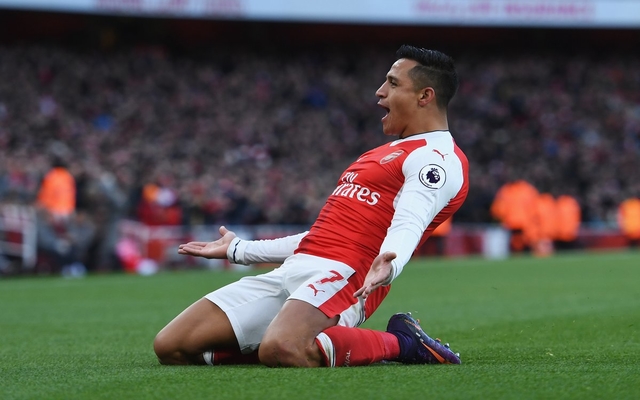 Arsenal are reportedly set to offer Alexis Sanchez a new contract worth £275,000-a-week in order to try and convince him to stay at the Emirates.

The 28-year-old has just 12 months remaining on his current deal, and as of yet, there’s no indication that he’s prepared to ink a new agreement any time soon.

That in turn is sparking tension and concern amongst Arsenal supporters, as they are undoubtedly desperate to avoid seeing their talismanic forward leave this summer.

Sanchez scored 30 goals and provided 19 assists in 51 appearances in all competitions last season, and so regardless of the arrival of Alexandre Lacazette, losing the Chilean international would be a major blow for the Gunners.

According to The Sun, they’re doing all they can financially to convince him to stay as they will offer him a £275,000-a-week contract, and while he did insist that he wants to play in the Champions League in an interview in Chile last week, Arsene Wenger remains confident that he will stay at Arsenal.

Further, the French tactician has no intention of letting him leave this summer for a Premier League rival with Manchester City linked with making a move, and so the transfer saga is likely to rumble on for some time yet.

Sanchez is not currently with the Arsenal squad on their pre-season tour as he has been given additional time off after featuring in the Confederations Cup, and so there won’t be any answers until he rejoins the club later this month and makes a decision over his future.

Arsenal run the risk of losing him for nothing next summer if they don’t sell him now, but it appears as though that could be a gamble that they’re willing to take as depending on what other business they’re able to do this summer, it could be enough, coupled with results next season, to convince Sanchez to commit his long-term future to the club.