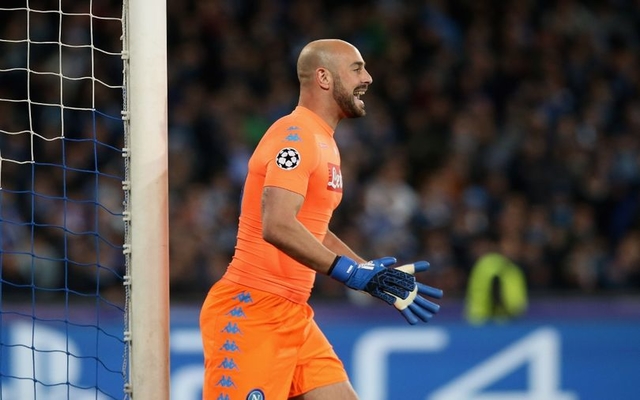 Man City boss Pep Guardiola is reportedly looking to sign Napoli goalkeeper Pepe Reina, but he’ll have to increase the initial offer for the Spaniard.

Despite signing Ederson earlier this summer, City are looking to add another shot-stopper to their squad as Guardiola prepares to offload Joe Hart and Claudio Bravo.

According to The Mirror, Napoli have rejected an opening bid of £2.6m, but the Serie A giants may be willing to do business for around £4.5m if City return with an improved offer.

While Hart has been snubbed by Guardiola since the Spanish tactician arrived last summer and was sent out on loan at Torino last season, the England international is set to leave again this year with a move to West Ham edging closer to completion.

Further, after a difficult opening campaign in England, it looks as though Bravo will be on his way out too as he struggled to establish himself as a commanding goalkeeper while also looking shaky in doing what Guardiola also brought him in for in terms of his ability to build from the back.

The arrival of Reina would likely spell the end for him, as in contrast, the former Liverpool goalkeeper would bring plenty of Premier League experience and quality to the Etihad, albeit in what would be a strange move for him.

While he’s currently a pivotal part of Maurizio Sarri’s plans in Naples, moving to Manchester would essentially see him left sitting on the bench behind Ederson. A chance to win major trophies is every player’s objective, but he’ll have to sacrifice playing time if he wishes for that to happen at City next season.