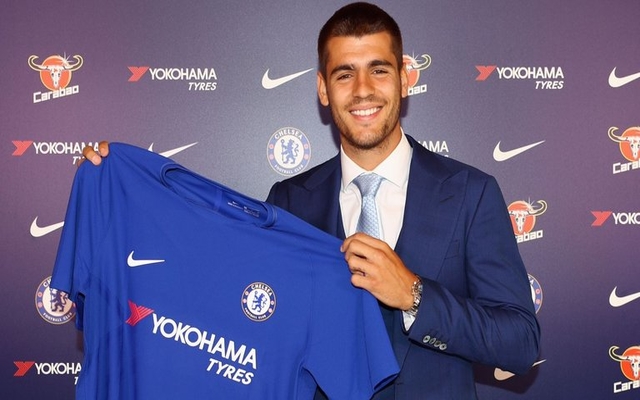 Alvaro Morata is delighted to have completed his move to Chelsea, having signed a five-year contract with the Blues after joining from Real Madrid.

Having arrived in London on Thursday to undergo his medical, he completed the formalities of the deal before Chelsea finally unveiled him on Friday evening as he now prepares to fly out to Singapore to meet up with his new teammates on their pre-season tour.

As per Sky Sports, he has completed a move which could eventually be worth £70m, making him Chelsea’s club-record signing. With the chance now to work with Antonio Conte, the 24-year-old was delighted to finally be with the Premier League champions.

He told the club website: “I am so happy to be here. It’s an incredible emotion to be part of this big club.

“I am looking to work hard, score as many goals as I can and to win as many trophies as possible.”

Morata will be expected to replace Diego Costa in the Chelsea line-up with his compatriot heavily tipped to leave this summer after troubles with Conte dating back to January.

However, it remains to be seen what shirt number the club’s fourth summer signing wears, as there has been a concerned reaction from supporters over him potentially wearing the No.9 shirt.

Going through the list of previous marquee names who have worn the shirt but failed to deliver in recent times, Fernando Torres, Radamel Falcao, Mateja Kezman and Franco Di Santo have all struggled to live up to the expectations of being the main goalscorer during their respective spells with Chelsea.

In turn, there was a nervous reaction from some supporters who hope that the ‘cursed’ shirt number won’t lead Morata to facing similar problems next season and beyond.

Not the number 9. A Spanish striker wearing number 9 hasn’t exactly worked out before.

That shirt number is cursed!!!! Dont do it!!

Noooooooo!! Just take Diego's when he's left. The 9 shirt is cursed I swear..