Liverpool midfielder Emre Can has been strongly tipped to leave the club this summer in favour of a £31m move to Juventus, as per reports in Italy.

In turn, he’ll be expected to continue to grow into an important figure for Jurgen Klopp, but speculation suggests that he could be heading for Turin in the near future instead.

As seen in the image below of the front page of Tuttosport on Sunday, coupled with Tuttosport also running an in-depth story online, they seemed convinced that there’s a strong chance Can could swap England for Italy. It’s worth noting at this point that they are a Turin-based publication. 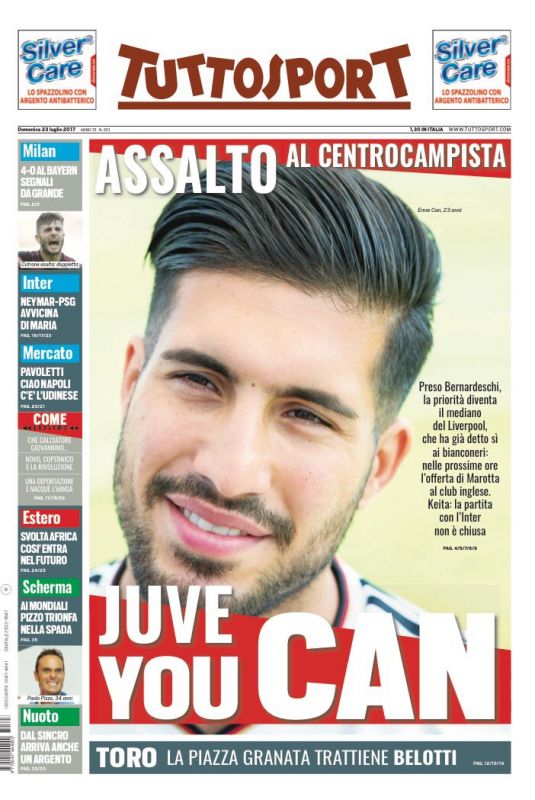 Nevertheless, it’s certainly a bold article as it’s claimed that the German international could even complete the move in the next few days as the Serie A champions continue to strengthen their squad.

Although losing Leonardo Bonucci to AC Milan was a huge blow, they’ve added Douglas Costa with Federico Bernardeschi expected to join him, while Can would undoubtedly strengthen their midfield options.

Liverpool reportedly remain hopeful that there will be a breakthrough in his contract situation as talks have stalled with just 12 months remaining on his current deal.

It’s unlikely that the Reds or Klopp will want to lose him this summer, but with Tuttosport even suggesting that Can is ready to be ‘Sami Khedira’s heir’, they seem very confident that a deal can be struck between all parties.