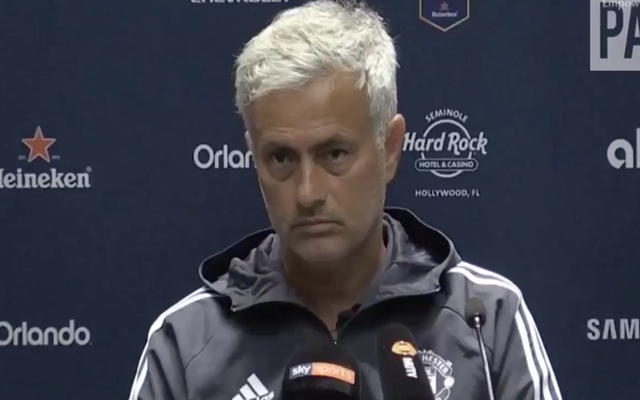 Man Utd boss Jose Mourinho has been discussing transfers with the media while on his side’s pre-season tour, and has delivered two major bits of news.

The Portuguese tactician has been busy looking at ways to strengthen his squad this summer, but one of the longest running transfer rumours continues to link a key player with an exit from Old Trafford.

Speculation over a move to Real Madrid for David De Gea refuses to go away, but Mourinho has looked to finally put a stop to it, as seen in the video below.

Jose Mourinho has confirmed that David De Gea will not be leaving Man United this season. #MUFC pic.twitter.com/hdTOZpBxRn

Mourinho ultimately believes that the matter is now closed and he will be able to rely on De Gea in the season ahead, and so that will certainly be welcome news for United supporters who will be desperate to keep one of the best goalkeepers in Europe at the club.

Meanwhile, for those hoping that Madrid superstar Gareth Bale could be coming to Manchester, Mourinho has moved to put an end to that story too as he insists that the Welshman, along with Cristiano Ronaldo, is a ‘mission impossible’ signing as he’s settled in Spain and wants to stay.

While he also confirmed that United haven’t even tried to sign him, that potential move looks to be completely off the table as the Red Devils look elsewhere to bolster their squad further.