Barcelona have reportedly sent club officials to England to push forward with their plans to sign Liverpool playmaker Philippe Coutinho.

The Spanish giants have long been linked with a swoop for the Brazilian international, and as seen below, the latest development is splashed right across Sport’s front page on Tuesday.

However, Sport have added further details in that although Liverpool consider Coutinho to be non-transferable, their resolve could be tested with a €100m bid if Barcelona are willing to put that much on the table. 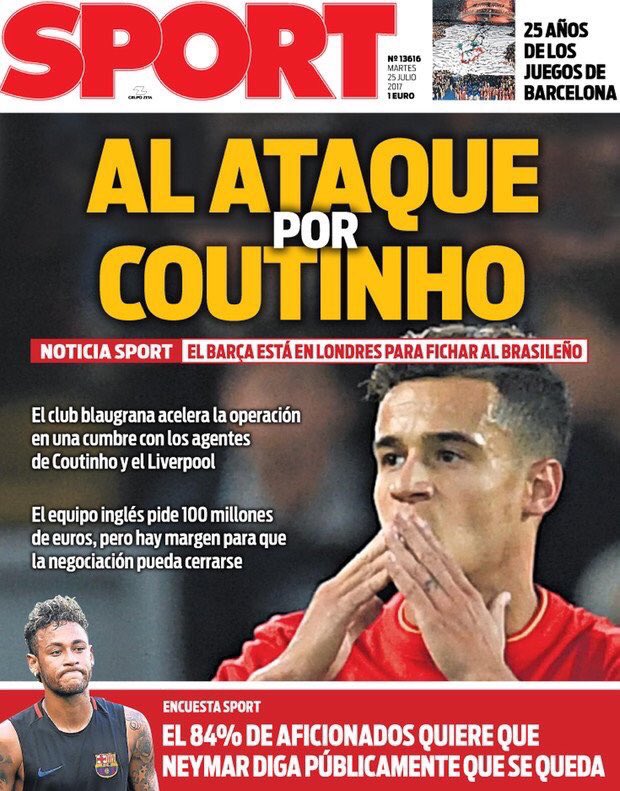 It’s added that negotiations are moving forward as the Catalan giants switch their focus from Marco Verratti to the Liverpool ace as their marquee signing this summer.

Nevertheless, it remains a ‘complicated negotiation’ as noted in the report, as although the 25-year-old is keen on the move, he wants to do it the right way with the Anfield giants and that is why Barca have sent officials over to England to carry out formal discussions.

There has yet to be an official offer as per Sport, but there is a suggestion that Barcelona are willing to pay up to €75m for Coutinho, although that may not be enough to convince their rivals. Wages are also an issue as it’s noted that there is no agreement on personal terms yet with Coutinho’s hefty demands, and so there certainly seems to be a long way to go before any deal is reached.

What is clear is that the former Inter playmaker is a key part of Jurgen Klopp’s side, and he’ll be desperate to see him stay at Liverpool, especially as they prepare for their return to the Champions League this season.

Aside from an injury setback which disrupted his form after the turn of the year, Coutinho had another impressive campaign last year, scoring 14 goals while providing nine assists in 36 appearances in all competitions as he was an influential creative hub for the Reds.