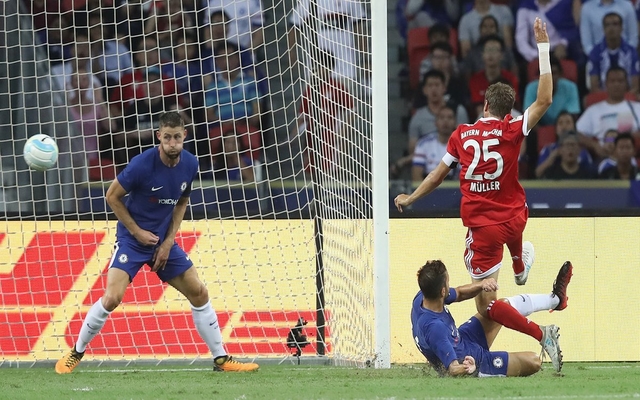 Bayern Munich secured a 3-2 win over Chelsea in their pre-season clash at the National Stadium in Singapore on Tuesday, with Thomas Muller bagging a double.

The Bundesliga giants made a fantastic start to the game, racing out to a three-goal lead after just 27 minutes with Rafinha and a brace from Muller putting them in complete control.

Muller’s second was undoubtedly the pick of the bunch as he curled in a superb effort past Thibaut Courtois as Bayern produced the perfect response to their defeat to AC Milan last week.

Marcos Alonso scored just before half-time to reduce Chelsea’s deficit with a wonderful drilled finish, as seen in the video below, while Blues fans were given another reason to cheer as Alvaro Morata came on after the break to make his debut for the club after his big-money move from Real Madrid.

Marcos Alonso fires one back for #CFC vs. Bayern, Is he worth £7m? #FPL pic.twitter.com/O52PBnt3Zy

However, it was Michy Batshuayi who continued his impressive pre-season form as he swept home from close range with just a few minutes remaining to set up a nervy finish, although that was where the scoring ended as Conte’s men fell to defeat.

Chelsea had their chances while Bayern had large periods of possession in a solid pre-season run out for both sides, as they now switch their focus to tasks ahead with bigger objectives to meet when the competitive football gets underway.