An image of Paul Pogba, Lionel Messi and Neymar enjoying a good laugh went viral on Thursday, and now the Man Utd star has produced a brilliant comment on it.

The trio evidently found something absolutely hilarious as they were captured in stitches prior to the pre-season friendly between United and Barcelona in Washington on Thursday.

Neymar went on to score the only goal of the game to seal victory for the Catalan giants, but it was matters off the pitch that ultimately stole the show.

Aside from seeing Neymar engage in conversation with Pogba alone before embracing Jose Mourinho which was enough to set off transfer speculation in itself, this image also created a few laughs for supporters.

However, Pogba’s gone one better as seen in the image below when he was tagged in an Instagram post asking to caption the image.

The cheeky Frenchman, who gave himself the ‘Agent P’ nickname prior to Romelu Lukaku signing for the Red Devils, has set pulses racing by jokingly suggesting that he was back recruiting during his chat with Neymar and Messi.

It’s highly unlikely we’re going to see either in a United shirt in the near future, but Pogba is clearly enjoying himself with it all. 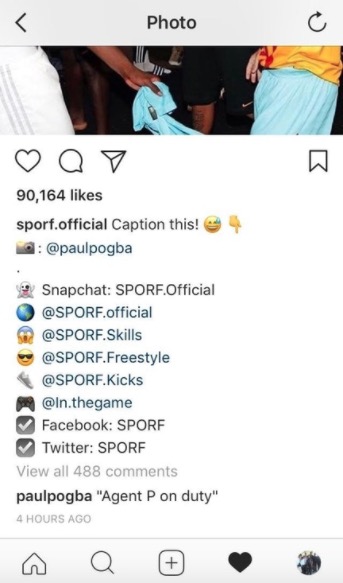