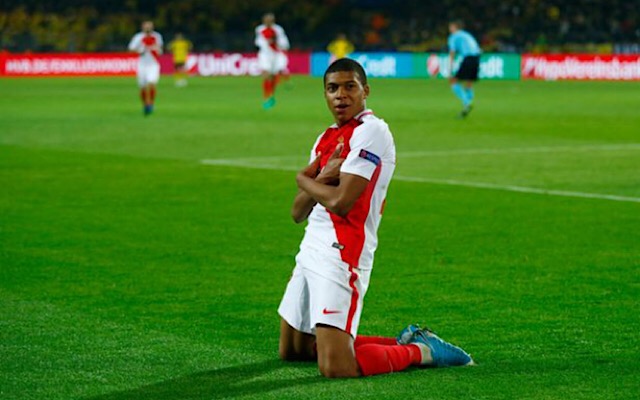 Kevin Mbappe has told Monaco that he wishes to leave the French champions this summer.

As reported in L’Equipe, the French international has now emerged as a serious contender to replace Neymar at Barcelona.

The Monaco forward has been the subject of intense transfer speculation throughout the summer.

Mbappe has been linked with both Liverpool and Arsenal, with bids of £100m rejected by Monaco.

Yet, with Neymar about to complete his world record £196m move from Barcelona to PSG, Mbappe has emerged as a potential replacement to the Brazilian in Barcelona’a attack.

According to L’Equipe, “a meeting has already taken place” between Barcelona and representatives of Mbappe.

Coached by legendary Frenchman Zinedine Zidane, as reported by the Daily Mail, Madrid were prepared to spend £100m on the forward, and loan him back to Monaco for the season.

Yet, despite moving on Alvaro Morata to Chelsea and Danilo to Man City, the European champions have yet to prepare a formal bid.

Mbappe rose to prominence last season and played a pivotal role as Monaco last season as won the Ligue 1 title for the first time since 2000, and reached the Champions League semi-finals.

Just last week, Monaco were still hoping of keeping Mbappe at the club. As reported by Sky Sports, “He (Mbappe) is the biggest hope of European football, all the big clubs want him,” said Monaco vice-president Vadim Vasilyev.

“We are discussing an extension with Kylian. I hope we will get there. This is a very important decision, especially for Kylian. We must give him time and not rush things too fast.”