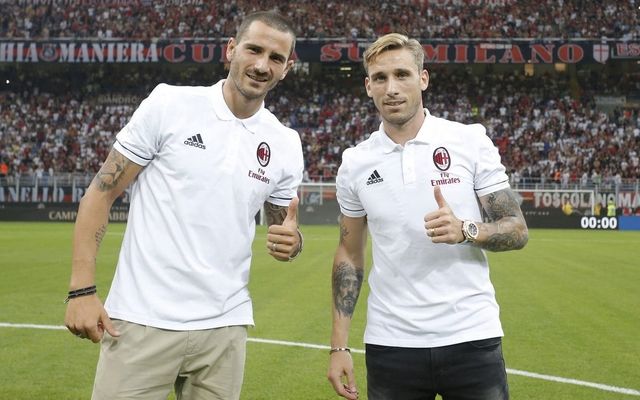 AC Milan have reportedly deposited the economic guarantees required for their signings of Lucas Biglia and Leonardo Bonucci, and the pair are now available for selection.

Much had been made of the fact that the guarantees hadn’t yet arrived as despite both signings being registered with the FIGC last month, the pair were unable to feature in the Europa League qualification clash with CSU Craiova.

However, as reported by La Gazzetta dello Sport, the guarantees have now been issued by Italian bank Ifis, and the duo will now be line to make their competitive debuts in Europe against Shkendija in the Europa League playoffs on August 17 and 24.

The Milan hierarchy has always maintained throughout that there was no concern on their part, but speculation elsewhere suggested that things could become problematic.

Nevertheless, the situation has now seemingly been cleared up, and after being paraded in front of a packed San Siro this week, Biglia and Bonucci will be desperate to get out on the pitch to help their teammates as soon as possible.

Meanwhile, Sky Sport Italia claim that Milan are edging closer to reaching an agreement for Nikola Kalinic, as it’s reported that a deal could be done after August 15.

There is still a distance in terms of valuation and offer though as Milan are willing to make a €20m bid, but Fiorentina are still looking for €25m. However, on a positive note, both parties are continuing discussions and so it looks as though progress will be made with an eventual deal being reached.

Vincenzo Montella has also been boosted by the form of Patrick Cutrone in pre-season and in the Europa League qualifiers, and so perhaps the youngster may have forced a rethink in the market with other big-name targets now starting to quieten down.