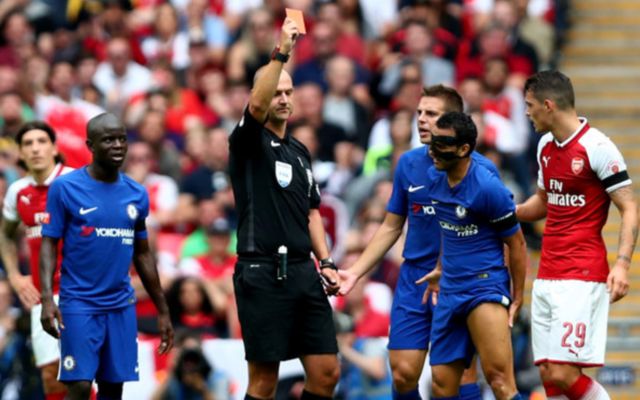 Arsenal beat 10-man rivals Chelsea 4-1 on penalties after drawing 1-1 in normal time in the Community Shield at Wembley, with new Arsenal freebie Sead Kolasinac starring in a match shrouded in controversy.

An 82nd minute header from new boy Kolasinac drew the Gunners level after Nigerian winger Victor Moses put the Blues ahead just a minute after the restart before the north London side won on penalties to win their third Community Shield in four years.

In the shoot-out, Gary Cahill, Theo Walcott and Nacho Monreal all converted as Arsenal sat 2-1 up, however Blues ‘keeper Thibaut Courtois skied his spot-kick way over the bar, with new £70M signing Alvaro Morata then putting his penalty wide of Cech’s right-hand post. With the Gunners 2-1 to the good, Alex Oxlade-Chamberlain and Olivier Giroud successfully converted their penalties to win the tie for the Gunners.

The match was not short of controversial moments, as Chelsea winger Willian was wrongly booked for what looked to be a dive by referee Bobby Madley, as on second viewing, the Brazilian was shown to have tripped over his own legs. The Blues were then reduced to 10 men after Spaniard Pedro was shown a somewhat harsh straight red for a late challenge on Gunners midfielder Mohamed Elneny.

It’s a disappointing start to the season for Antonio Conte’s side, with Blues fans going into this season with high expectations following their more than impressive title win last season. In contrast, the Gunners will be going into their Premier League opener with Leicester City on Friday on a high following their second competitive victory over the Blues in three months.

We’ll have to wait and see just how pivotal a point in the season this match will be for Chelsea and Arsenal, with both sides looking to compete for the title this season.

Man of the Match: Sead Kolasinac