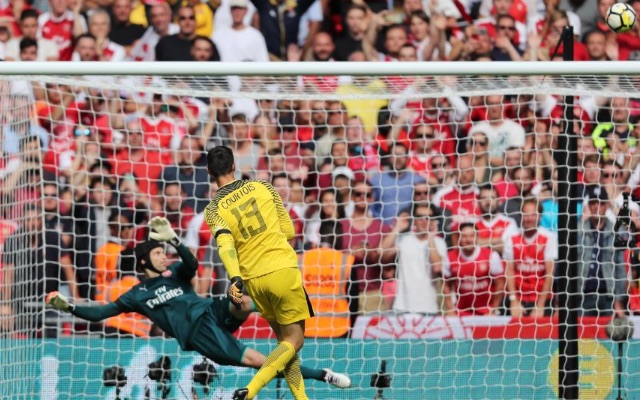 Petr Cech has a pretty abysmal record when it comes to penalties – he hardly EVER saves them.

Even on Sunday, when Arsenal beat Chelsea 4-1 in a Wembley shootout, Cech didn’t manage to get a hand on any of Chelsea’s spot-kicks.

However, he appears to be claiming credit for one of his former club’s missed pens…

This is why he missed!

Petr Cech knew exactly how to throw Chelsea off during the Community Shield penalty shootout pic.twitter.com/G3e2JwZw1K

Thibaut Courtois spectacularly fired over the bar from 12 yards at Wembley, but did Cech make him do so?

According to Cech, who used to work with the Belgian when they were both Chelsea players, Courtois took penalties quite often in training.

Cech says that Courtois always used to put them in the same top corner, which is where he dived on Sunday.

Seeing Cech dive the correct way put Courtois off and forced him to change his approach, the Arsenal stopper suggests, possibly explaining why Wembley witnessed one of the worst spot-kicks ever.

We’re not sure we’re buying this from Cech, though. He just sounds like a desperate keeper trying to manufacture some rare penalty praise.