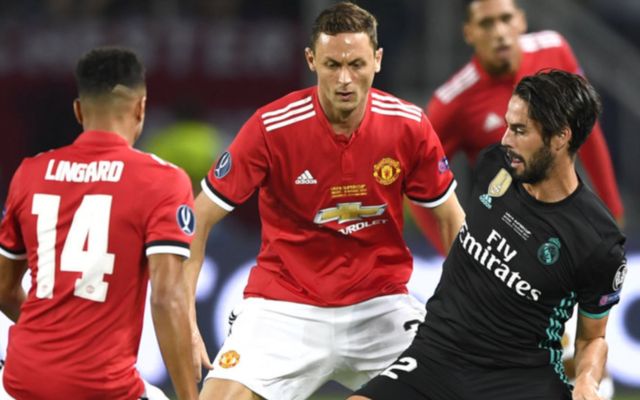 Madrid, who defeated the Red Devils to become the first side since AC Milan in 1990 to retain the European Super Cup, won with goals from midfield duo Casemiro and Isco, with their Premier League opponents managing to pull one back through new £90M man Romelu Lukaku, who joined for an English club record from Everton earlier this summer as per the Daily Mail.

Zinedine Zidane’s side took the lead on the 24th minute, after the Brazilian latched on to a lofted through ball from defender Dani Carvajal and slotted the ball past United shot-stopper David De Gea despite calls for offside from the United backline.

United then had a glorious chance to cut the deficit in half, after Romelu Lukaku missed what looked to be a certain goal after the Beglian skied his shot over with the goal at his mercy after Keylar Navas denied Frenchman Paul Pogba’s header at goal.

Lukaku then made amends for his earlier error in the 62nd minute, as the former Everton forward pounced on a rebound to slot home after Madrid ‘keeper Navas failed to keep ahold of Nemanja Matic’s long range effort.

It’s a disappointing start for Mourinho’s side, who would’ve liked to have started their season off with a win and some silverware ahead of their Premier League opener against West Ham on Sunday.

On the other hand, Spanish giants Madrid will be delighted with their win, as Zinedine Zidane’s side look to continue the impressive form which saw them win both La Liga and the Champions League last season.