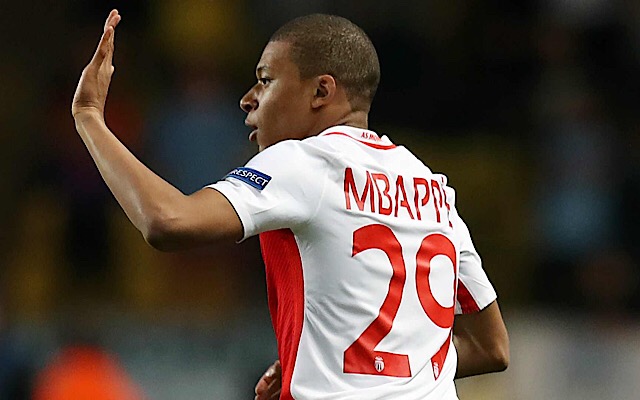 PSG are to meet with Portuguese superagent Jorge Mendes as they look to lure Kylian Mbappe in a £162m deal.

Real Madrid were thought to be leading the race to sign the Monaco wonderkid, who took the French league by storm last season.

Yet the European champions have yet to make an offer, leaving PSG to make their move according to the Daily Express.

Gareth Bale has rejected overtures from Man Utd to remain in Spain, and the Welshman would block Mbappe’s chances of a regular first team spot.

PSG have only just completed the signing of Neymar in a world record transfer from Barcelona, yet are looking again to add firepower to their attack.

Gazzetta dello Sport believe PSG are aware of Real and Man City’s interest in the player, and are looking to secure the player should the situation change.

Having lost Bernardo Silva, Timoue Bakayoko and Benjamin Mendy to the Premier League, Monaco are loathe to see any more of their title winning squad depart the club.

Yet it is believed the £162m offer for a homegrown talent – who a year ago was barely known outside of French football – may be too good too tempting an offer to turn down.

PSG are also looking into the availability of the versatile Fabinho. The Brazilian stormed out of training yesterday, according to The Sun.

During a training session in the beautiful, Fabinho was filmed walking off the field whilst a practice match was going on.

Fabinho threw his bib to the ground in fury before booting a ball as he walked towards the dressing room. There were suggestions his problem was with Mbappe, though that has not been confirmed.