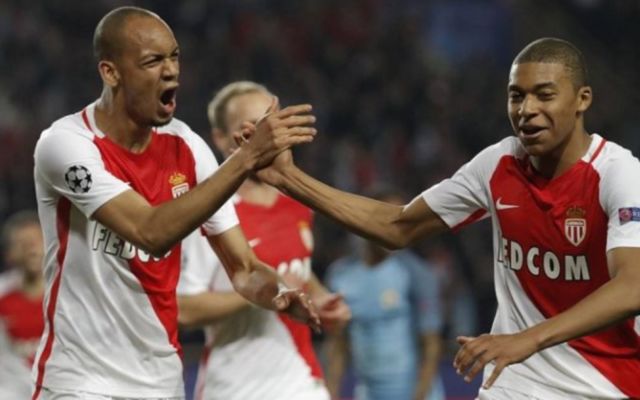 Paris Saint-Germain are on the verge of completing a shock double swoop for highly-sought-after Monaco pair Kylian Mbappe and Fabinho, which looks to set the former Ligue 1 champions back more than £200M+, according to the Daily Record.

According to the Daily Record, sources at PSG have stated that club do not intent to let money get in the way of them creating the forward-line of Kylian Mbappe, Edinson Cavani and Neymar, with the club already having a deal in place to sign Mbappe’s Monaco teammate Fabinho, with Atletico Madrid’s Jan Oblak also being chased by the French side.

Last month, PSG were one of three clubs to make a £163M bid for Mbappe last month as per the Daily Record, which would be the second highest amount paid for a football in history, with European rivals Real Madrid and Man City also in pursuit of the forward’s signature.

Fabinho, 23, has attracted big attention from both Man City and Man United, with Pep Guardiola and Jose Mourinho post eager to secure a deal for the Brazilian, however it seems PSG are the club that are closest to signing the midfielder at the moment, report the Daily Record. Should Fabinho make the move from Monaco to PSG, it’s more than likely going to set the club packed more than £40M, as French side have already had a bid of £39M turned down by Monaco, as per the Metro.

Former Ligue 1 champions PSG are also eager on a deal for Atletico ‘keeper Jan Oblak as reported by the Daily Record, who has a £90M release clause in his contract with la Rojiblancos, with the player reportedly unwilling to leave club until January due to Atleti’s ongoing transfer ban.

Should both Mbappe and Fabinho make the move from Monaco to PSG, it’s sure to set the French giants back more than £200M, and with the club already completing the signing of Neymar from Barcelona for £198M as per the Telegraph, it’s set to take PSGs spending to over £400M as the club look to turn themselves into one European football’s most feared sides.