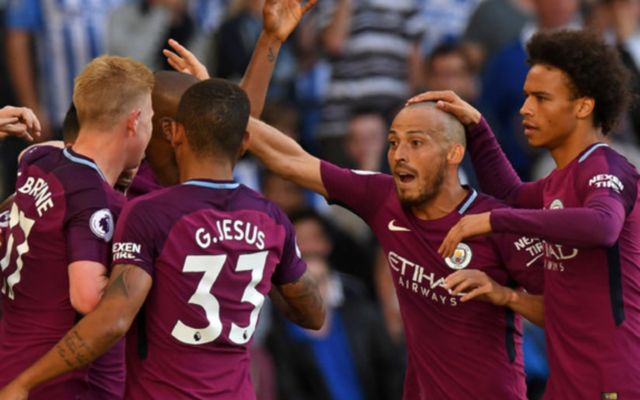 Manchester City cruised past Premier League new-boys Brighton 2-0 at the Amex this weekend, with goals from Sergio Aguero and an own-goal from Brighton captain Lewis Dunk securing all three points for Pep Guardiola’s side, with new signing Kyle Walker, who joined the club for £50M as per the Independent,  picking up man of the match following an impressive display

Man City had to wait until the 70th minute to open the score on the south coast, as a fine counter-attacking move which involved both Kevin De Bruyne and David Silva was finished off cooly by Argentina striker Sergio Aguero.

City then made sure that they would be brining three points back to Manchester with them, as a cross from Fernandinho was aimed towards Brazilian Gabriel Jesus, however Brighton defender Lewis Dunk rose highest and powered a header past teammate Matt Ryan as City doubled their lead.

Jesus thought he put Pep Guardiola’s side ahead on 27 minutes, after the striker put the ball past Ryan following a fantastic pass from De Bruyne, however referee Michael Oliver ruled the goal out for handball, as the referee deemed the Brazilian to have handled the ball deliberately. It was a debatable decision to say the least, however to then see Oliver book Jesus was even more confusing. Poor officiating if I do say so myself.

There were few chances throughout the 90 minutes at the Amex stadium, with the best chance in the first half falling to Jesus, who saw his header brilliantly saved by Ryan in the Brighton goal following a fine passing-move from the Citizens.

Brighton had a limited number of chances in the game, with their best attempts coming in the first half, as City’s defence made a number of blocks to deny the Seagulls from taking the lead.

It’s a good start for City and Guardiola, as the Spaniard looks to win his seventh league title as a manager, and win City’s third Premier League title since 2012.

For the hosts, it wasn’t all doom and gloom despite the result, as the newly-promoted side defended well and managed to keep the score at 0-0 until 20 minutes before the end.