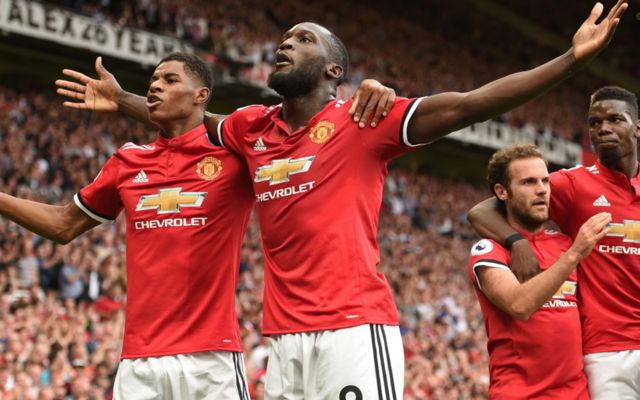 Romelu Lukaku started his Premier League career for Man United in style with two goals as the Red Devils went to the top of the table after thumping West Ham 4-0 on Sunday.

Lukaku scored either side of halt time to get his Man United career off to the flier, with French duo Paul Pogba and Anthony Martial also managing to find themselves on the scoresheet as they thrashed a very poor West Ham side 4-0 at Old Trafford.

Lukaku opened the scoring for the home side in the 33rd minute, as the Belgian slotted past on-loan Man City ‘keeper Joe Hart after being put through by Marcus Rashford following the 19-year-old’s brilliant solo run. It was Lukaku’s first Old Trafford strike since moving from Everton for £90M earlier this summer, which was reported by the Daily Mail.

Lukaku then doubled his, and United’s, goal tally just after the restart, as a free-kick from Henrikh Mkhitaryan was crossed into the West Ham box, with the Belgian rising highest to head home past Hart as United looked to begin their season off with a win.

West Ham then almost made an instant reply, after a header from new signing Marko Arnautovic was brilliantly saved from Spaniard David De Gea.

Jose Mourinho’s side then has a chances to make it three, as Lukaku was denied a hattrick thanks to a brilliant block from Pablo Zabaleta before Rashford was denied a by the post after firing from 20 yards.

United then found a third through Frenchman Anthony Martial, as the former Monaco man was put through by Mkhitaryan before slotting cooly past the advancing Hart to put the home side firmly in the driving seat.

The Red Devils then made it four thanks to France international Paul Pogba, after the midfielder finished off the rout with a fine strike from just outside the box.

For United, things couldn’t have gone much better as they find themselves at the top of the table, albeit with just one game played.

For the visitors West Ham, the signs don’t look promising, with the result leaving Slaven Bilic a lot of work to do to meet the expectations of Hammers fans.