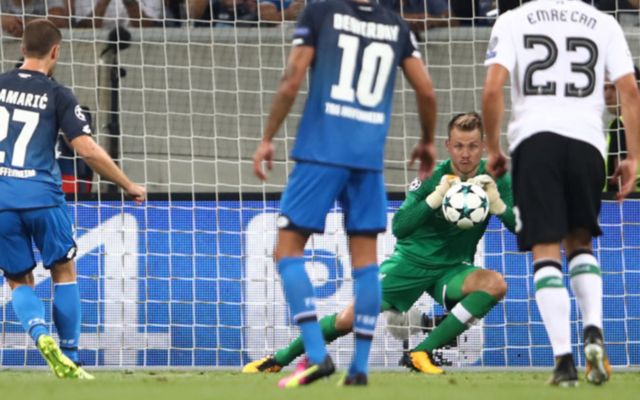 Liverpool took a big step towards qualifying for the 2017/18 Champions League tonight, after the Reds beat Bundesliga side Hoffenheim 2-1 at the Rhein-Nackar-Arena in a match which saw 18-year-old Trent Alexander-Arnold score a fantastic free-kick on his European debut.

Liverpool opened the scoring on the 35th minute, after defender Alexander-Arnold placed a beautiful 28-yard free kick on the bottom corner to leave Hoffenheim ‘keeper Oliver Baumann rooted the spot.

Jurgen Klopp’s side then doubled their lead in the 74th minute, after a fast-paced counter-attack ended up with midfielder James Milner placed a brilliant curled effort past Baumann into the top corner from what looked like an impossible angle, although the ball did take a slight deflection off of former West Ham defender Havard Nordtveit on its way in.

German side Hoffenheim then gave themselves a life-line going into the second leg at Anfield, after substitute Mark Uth scored a well-timed left-footed drive past Mignolet to halve to deficit.

Hoffenheim had the chance to take the lead earlier on the match from the spot, after Dejan Lovren had fouled on-loan Bayern Munich winger Serge Gnabry, only for striker Andrej Kramaric to take one of the worst penalties football’s ever seen, as the Croatian fired his spot-kick tamely at goal, allowing Simon Mignolet to make a comfortable save to keep the score at 0-0.

Liverpool then took their turn to miss a chance at opening the scoring, as new signing Mohamed Salah ran through one-on-one, only to see his right-footed effort sail wide of the Hoffenheim goal.

For Liverpool, this result is massive, as the two away goals the Reds managed to secure puts them firmly in the driving seat going into next week’s second-leg at Anfield.

For the hosts, it looks as if Julain Naggelsmann’s side have it all to do if they are to qualify for this season’s Champions League proper.