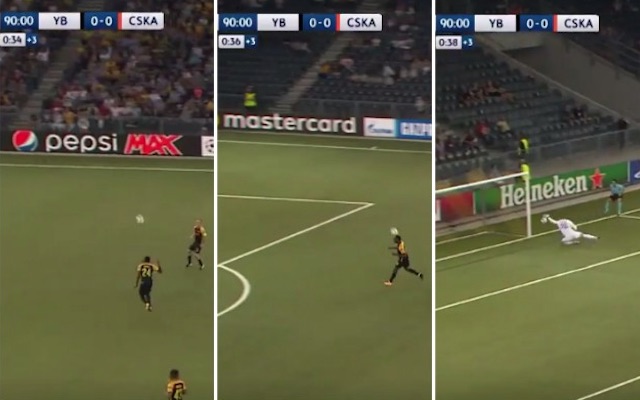 Kasim Adams Nuhu broke the hearts of his own fans last night with an outrageous own goal in extra-time to sink Young Boys to a 1-0 loss in the first leg of their Champions League play-off against CSKA Moscow.

Having been the stronger team in the second half, Swiss side Young Boys were pressing for a goal to take an all important lead into the second leg of their crucial Champions League play-off, but subsequently found the back of their own net in emphatic and comical fashion.

The own goal from the Ghanian Adams Nuhu was more than capable of winning any game and a finish that many world-class strikers would have been proud of. Taking the ball out of the air 30 yards from his own goal Adams Nuhu juggled the ball on his head before sensationally lobbing his own goalkeeper from outside the box.

Watch the heartbreaking, yet sensational moment below.

Up steps Kasim Adams Nuhu with a sensational own goal… ? pic.twitter.com/qlwFaFwMac