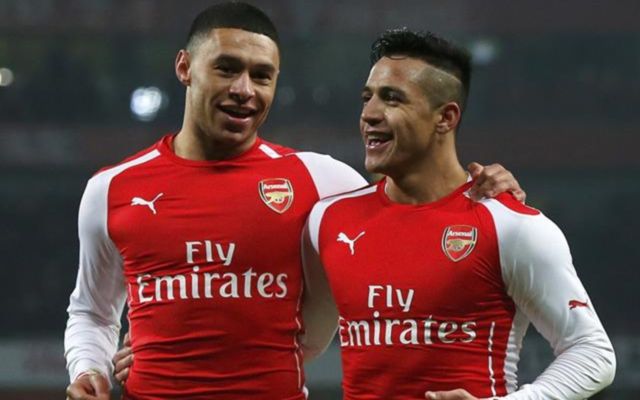 Arsenal manager Arsene Wenger has admitted that Alexis Sanchez could be sold to rivals Manchester City this summer, with the Gunners boss also failing to guarantee that Sanchez’s teammate Alex Oxlade-Chamberlain won’t be sold to London rivals Chelsea, as reported by the Daily Star.

As per the Daily Star, Gunners boss Wenger had insisted the whole summer that the pair would not be leaving the club for their Premier League title rivals, but when asked whether he could 100% confirm that both Sanchez and Oxlade-Chamberlain would still be at the club beyond August 31st, Wenger admitted that “One hundred per cent never exists in our job.”

Man City have been constantly linked with a move for Sanchez this summer, with the Citizens expected to up their last offer of £50M to a the new and improved sum of £60M. Chelsea also look to up their pursuit of Oxlade-Chamberlain according to the Daily Star, with the Blues set to up their offer for the midfielder to £40M.

Wenger is still hoping that the duo, as well as German international Mesut Ozil, will stay at the club this summer, as the Frenchman confirmed that “I think all the three will stay. I will fight for them to stay.”

Should Arsenal lose both Sanchez and Oxlade-Chamberlain, it’ll come a huge loss for the Gunners, as they lose two of their most high-profile stars just weeks before the transfer window shuts.