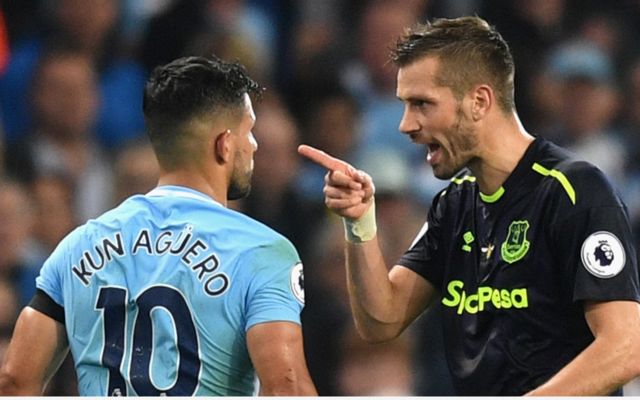 Wayne Rooney scored on his return to Manchester as Everton secured a 1-1 draw with Man City at the Etihad tonight in a match that saw both sides end the game with 10 men.

Rooney, who transferred to the Toffees from City’s rivals Man United this summer, opened the scoring for the away side in 35th minute, after the ball was cut back by youngster Dominic Calvert-Lewin before the 31-year-old slotted the ball home via the feet of City ‘keeper Ederson.

Man City then found themselves down to 10 men just before half time, as Kyle Walker, who joined the club from Spurs for £50M in the summer according to the Independent, was shown a second yellow for what referee Bobby Madley must’ve deemed to be a deliberate elbow, much to the dismay of the home faithful.

City had to wait until the 82nd minute to find their equaliser, as a poorly-cleared header from Mason Holgate saw the ball land at the feet of Raheem Sterling, who hammed his half-volley past Jordan Pickford in the away goal.

Everton were then the ones who found themselves down to 10 men, as Frenchman Morgan Schneiderlin picked up a second booking for a late challenge on Sergio Aguero, with Madley deciding that the minimal contact that Aguero received was enough to send the midfielder off.

Referee Bobby Madley has an atrocious game, with the 31-year-old making mistake after mistake during the match, with both his red card decisions looking extremely harsh in review. I wouldn’t be surprised to see him refereeing in the Championship next weekend.

For Man City, manager Pep Guardiola will view this as two points lost, with the Citizens still looking shaky in defence as they look to rival Manchester United for the Premier League title this season.

For Everton, this performance should fill their fans with optimism, as the Toffees look to improve on the seventh place finish they secured last season.