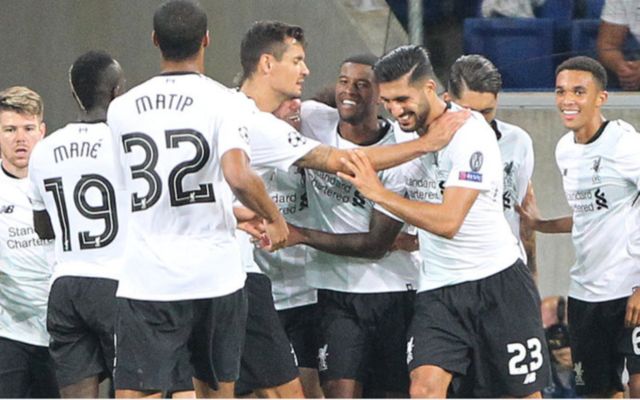 Liverpool scored three fantastic goals tonight in their Champions League qualifier with Hoffenheim at Anfield, as the Reds take a huge step closer to qualifying for the Champions League group stages.

Jurgen Klopp’s side took the lead agains the Bundesliga club thanks to a well-worked team goal that was finished off by Emre Can, as Mo Salah then doubled the Reds’ lead before a fantastic passing move lead to Emre Can bagging his second thanks to wonderful work from Sadio Mane and Roberto Firmino.

With team-play like that, it’s going to be hard to look past the Merseyside club to not make it out of the groups stages should they got the job done against Hoffenheim tonight.

Liverpool go ahead thanks to Emre Can ?

But it was all about the assist from Sadio Mané ? pic.twitter.com/xxlmKNj21s

Liverpool are running rampant and Jürgen Klopp loves it!

What a team goal this is ? pic.twitter.com/GsvCFxYOBl