After their comprehensive win over Arsenal, it’s no surprise that Liverpool dominate Garth Crooks’ Premier League team of the week this time round.

Jurgen Klopp’s side were far superior to their rivals, and the menacing movement, pace and finishing of Sadio Mane and Mohamed Salah ensure that the pair are included in this XI.

They’re joined by teammate Joel Matip who was defensively sound throughout when Arsenal did threaten, and so overall it was a thoroughly enjoyable performance and result for Liverpool.

Meanwhile, Cesc Fabregas and Cesar Azpilicueta ensure that there is Chelsea representation after their win over Everton. Fabregas broke the deadlock in a star performance as he ran the show in midfield, while his compatriot grabbed an assist for the second and was defensively reliable as he always is.

Kasper Schmeichel is between the posts after pulling off a number of top saves in the defeat at Man Utd to ensure that it was an embarrassing evening for Leicester City, with Benjamin Mendy completing the defence, in a strange back three given he didn’t play in one.

Nevertheless, City hero Raheem Sterling is also included in the XI after his late winner, with Kevin De Bruyne also getting the nod after an influential display in midfield.

Matt Ritchie completes the midfield, while Chelsea fans will also be pleased to see loanee Tammy Abraham also make the team of the week as he impressed for Swansea.

Crooks has arguably done a decent job this week, disagree with any of his picks? 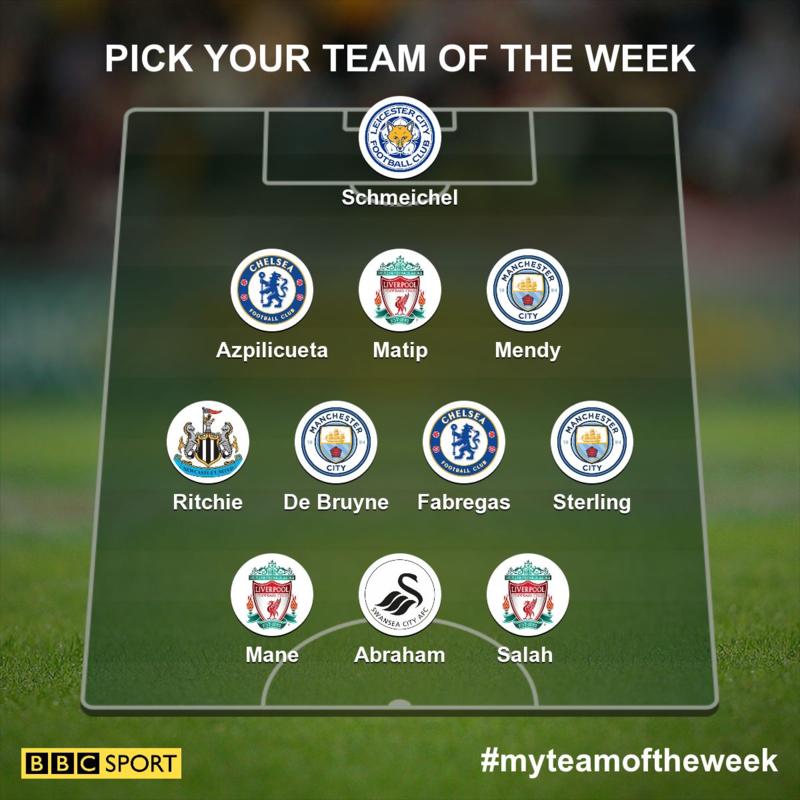