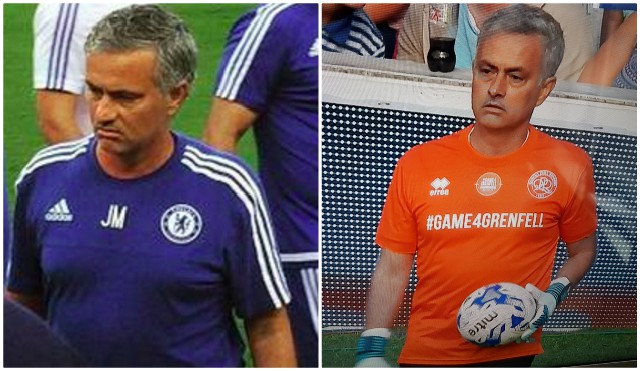 Jose Mourinho announced himself at The Special One upon moving to England in 2004 when he left European champions Porto to take charge at Chelsea.

But the 54-year-old, now in charge of Manchester United, apparently has a new nickname these days.

According to The Sun, Mourinho’s Old Trafford colleagues call him The Skinny One following his recent weight loss.

Mourinho has toned up over the summer and is now significantly leaner than he was during his second spell at Stamford Bridge, which ended in December 2015.

His modest man boobs have transformed into firmer, flatter pecs.

Mourinho’s body transformation is reflected by his before and after photos above.

The first was taken in 2015, while the second shows Mourinho in action at a recent charity match in London.

Mourinho played as a goalkeeper for Team Shearer in Game 4 Grenfell.

His side lost 5-3 in a penalty shootout at Loftus Road, after the 90-minute match had ended 2-2.