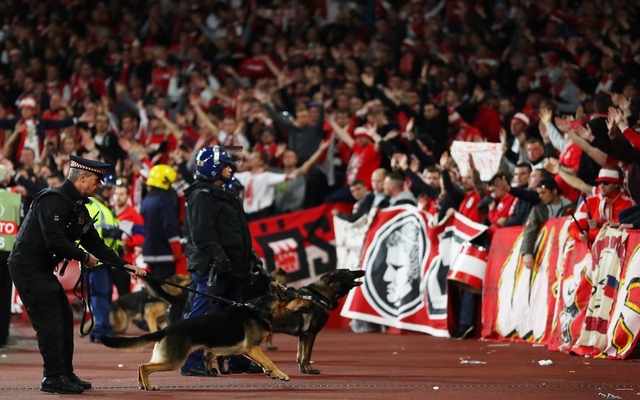 Arsenal secured a 3-1 win over FC Koln in their delayed Europa League game on Thursday night, but the visiting fans certainly made their mark.

The decision was taken to delay kick off for an hour in the interests of public safety, because as seen in the videos below, up to 20,000 Koln fans arrived in London ahead of the game.

While that was well above their ticket allocation, it caused real problems for the authorities and stewards at the stadium who were involved in angry clashes inside and outside of the Emirates.

According to The Sun, at least four arrests were made, with some Koln supporters wearing Arsenal merchandise to sneak into the stadium.

Aside from the troublemakers though, it was a pretty incredible sight to see the German side’s faithful travel in such big numbers and take over London for the day.

As seen in the videos below as they marched through central London before moving north, they have a passionate fanbase that continued to sing for their side well after the full-time whistle had sounded on Thursday night.

In turn, they certainly left their mark in a positive way too with many Arsenal supporters clearly impressed with their commitment to back the club on their long-awaited return to European football, and now it remains to be see what the reception is like in the reverse fixture…

Absolute madness at today's game, atmosphere was amazing even though I sat with the FC Koln fans for the whole thing ? crazy #AFCvsCOL pic.twitter.com/8Wc2ztmZLD

Koln fans making the most of the night pic.twitter.com/3sttY38Q06

We just had this coming down the street. Koln fans arriving for a trip to the Emirates Stadium. Long walk! pic.twitter.com/tUPHNTvx4r

FC Koln fans are causing chaos outside the Emirates this evening… ?? (@PintsandPyro) pic.twitter.com/nFhs1y06dw

Koln fans fighting with stewards inside Emirates stadium. Group arrived in home end and fought their way into away section. pic.twitter.com/7RC17WZyz2