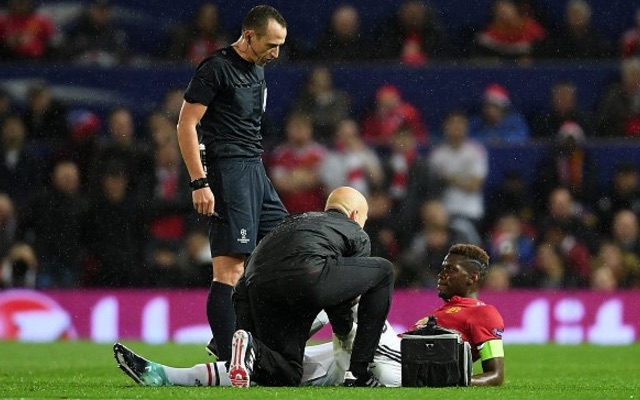 Jose Mourinho branded suggestions that Paul Pogba had been ruled out for three months as “completely nonsense” as the Manchester United boss spoke to the media after a big win without his star midfielder on Sunday.

Pogba-less for the first game this season, United beat Everton 4-0 at Old Trafford to move level with rivals Manchester City at the top of the Premier League table.

The France international and one-time most expensive footballer in the world was seen on crutches earlier in the week after suffering a hamstring injury during United’s 3-0 victory over Basle in the Champions League on Tuesday.

A report by The Times on Saturday night claimed that United were fearful that Pogba might miss the 12 weeks.

“The player was diagnosed initially after the match because of the conditions of the muscle and the bleeding. The decision was one more week to wait and to see really clearly in the scans the dimension of the injury.

“And nobody in the club spoke about 12 days or 12 weeks. Not at all. It’s a muscular injury in the hamstring, but we have a normal procedure and wait a few more days, so it’s completely nonsense information.”

Mourinho opted to partner Nemanja Matic with Marouane Fellaini in central midfield against Everton, who were in the game at Old Trafford until they conceded a second goal on 83 minutes.

The Toffees then capitulated, letting in further goals on 89 minutes and in stoppage time.