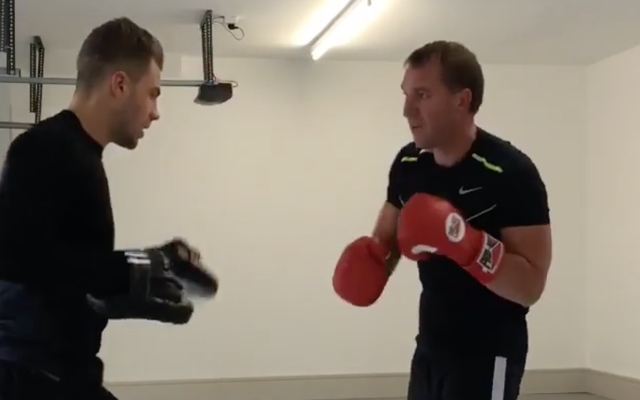 Rio Ferdinand announced on Tuesday that he’s giving pro boxing a go, and it’s a decision that will undoubtedly split opinion.

Now it’s fair to say he’s not going to step in the ring with a monster at the end of his training camp. In similar fashion to Freddie Flintoff, it’s more than likely he’ll pluck a journeyman out of obscurity open to the idea of potentially being embarrassed and with money on his mind.

On one hand this is probably the biggest farce since Floyd Mayweather vs Conor McGregor, on the other, who are we to say what Rio can and can’t do.

He isn’t the first and won’t be the last footballer to dip into the world of boxing, and we’ve (jokingly) picked out five people who he could square off against based on their boxing skills previously being put on show for the world. If he can call out Anthony Joshua, then we should all have fun with this one!

For what it’s worth, various boxing outlets have speculated that it will be Darnell Boone, an American fighter with a 23-24-4 record, who will actually be Ferdinand’s first opponent.

Being semi-serious for a minute, here’s a footballer who knows what it takes to step into the ring and have a fight. Different weight classes so won’t happen as he fought as a super-welterweight, but Ferdinand won’t want to fight a top operator on his debut.

Woodhouse won his professional fight after knocking his opponent down twice in the final round to win on points, and he’s already had a cheeky dig at Ferdinand on social media to spice things up.

McKenzie’s taken it one step further than Woodhouse, as he’s had 11 fights, with a record of 8-2-1. Again, as a super-middleweight he won’t get in the ring with Ferdinand who has yet to reveal his weight class.

Nevertheless, it’s another example of stepping into the world of boxing and giving it a go. Rio has ambitions of fighting for a title, here’s the blueprint to follow.

Now to the serious stuff… Here is Celtic boss and former Liverpool manager Brendan Rodgers showing off on the pads and to his credit, he’s digging in some decent shots.

Now we’re assuming that he’s not training to get into the ring any time soon and this is more for fitness, but still, there’s probably a few who would love to see him square up with Ferdinand.

Brendan Rodgers putting in that work with me at 6.45am this morning. I've been training Brendan for the past 10 weeks now, a brilliant client who I'd happily set my alarm for at 5.30am ?? I beasted Brendan today starting with a 20 minute fast run around his amazing neighbourhood before getting the gloves on. Looking forward to sharing his 12 week transformation in the next couple of weeks as he prepares to get back into football managment next season ?? #bradleysimmonds #personaltrainer #brendanrodgers #boxing #padwork #football #premierleague #fitness #fitspo #fitfam #lean #leangains

Here’s that infamous video with Rooney getting ‘knocked out’ by Phil Bardsley, with the stalwart using it as a celebration shortly after at Old Trafford but he was also clearly irked by it being leaked and the response to it.

Being good mates with Rio could make this tricky, but he’s not afraid of the histrionics after his brief appearance on WWE. Ferdinand vs Rooney? Go on then…

Saving the best till last, we can only imagine the response if Balotelli was named as Ferdinand’s opponent for this fight.

Here the Italian is showing off his skills in one of many boxing videos that he’s released over the years. It’s fair to say many would pay to see him have a scrap with Rio…

Mario Balotelli with a round of slap boxing ? pic.twitter.com/Pubv7y3SeJ