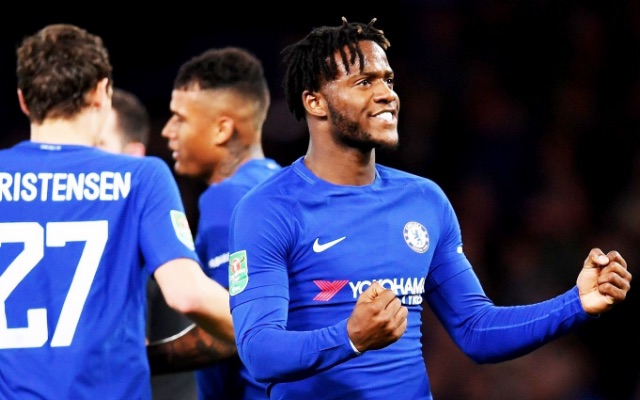 Michy Batshuayi went home with the match ball after scoring a hat-trick as Chelsea beat Nottingham Forest 5-1 in the Carabao Cup third round on Wednesday night.

But his three-goal display wasn’t quite good enough to win the Man of the Match award in our eyes.

That’s not because he was bad… it’s just because Eden Hazard was so much better.

Making his first Chelsea start of the season, Hazard set up two of Batshuayi’s goals.

He created Batshuayi’s first with brilliant vision and then displayed outrageous generosity to hand him his second on a plate, after refusing a VERY easy opportunity to score himself.

Batshuayi completed his first ever Blues hat-trick in comical fashion after a fierce strike from Kenedy rebounded off the crossbar onto the Belgian’s belly, which deflected the ball into the net.

Kenedy had earlier opened the scoring with a simple tap-in set up by a fine cross from Antonio Rudiger, before Charly Musonda – who was lively – scored his first goal for the Blues, which he celebrated with great passion.

Willy Caballero will be disappointed to have been denied a debut clean sheet by Tendai Darikwa’s stoppage-time consolation goal, but the former Manchester City goalkeeper did make a good save earlier in the match.

Elsewhere on the pitch, Cesc Fabregas has a field day in midfield, revelling in the ample space he was afforded and putting on a fine exhibition of passing.