Barcelona defender Gerard Pique has been the subject of several posters asking for the Catalan man to be excluded from the Spain squad amidst criticising police over the Catalonia referendum unrest on Monday. The former Manchester United man has long faced criticism for his pro-stance on Catalonia independence.

According to the Telegraph, Spain supporters gathered at the Las Rozas training facility in Madrid to watch the national side train in an open session with cries of ‘Pique out’ chanting and whistling every time the centre-back was on the ball. 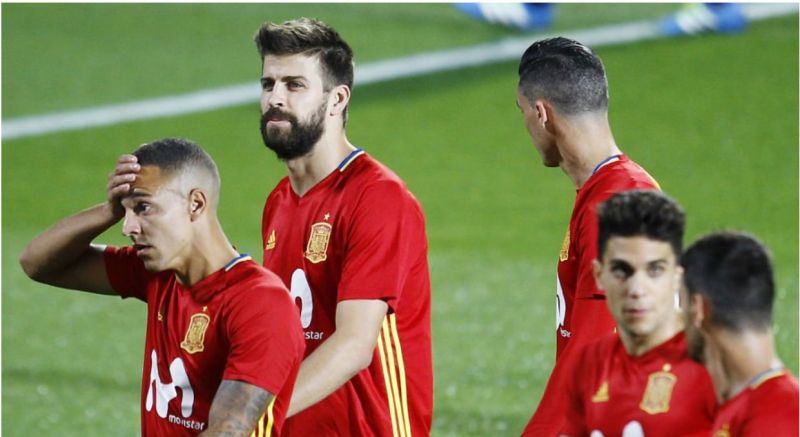 Media in Spain reported that police had confiscated some of the banners, one of which included the word ‘sickening.’

The 30-year-old stated on Sunday that he would leave if the squad management or Spanish football governing body asked him to.

He will retire after the 2018 World Cup, partly due to constant criticism of his game whilst playing for his country.

Pique has featured in 91 matches for Spain and was part of the side that won the 2010 World Cup and Euro 2012.

Spain are leaders of Group F in World Cup qualifying and are set to play Albania and Israel in their final two games.

Football News 24/7
Newspaper hilariously claim that Ronaldo has reached out to Pique over Barcelona transfer in Spanish April Fools Day jibe that jokes about Man United man renting Messi’s house and the Europa League
Dec 28 2021, 10:40
Manchester United FC
Barcelona got what they deserved in Bavaria and can’t have any complaints
Dec 8 2021, 22:56
Champions League
Gerard Pique calls on Barcelona fans to get behind the team in their hour of need
Dec 7 2021, 20:07
FC Barcelona
Barcelona must resist Liverpool and Chelsea’s overtures for young superstar at all costs
Dec 1 2021, 7:36
Liverpool FC
Could Xavi’s new rules see Gerard Pique quit Barcelona at the end of the season?
Nov 10 2021, 20:58
FC Barcelona
Xavi needs to follow through with the promise of rules first at Barcelona and playing identity later
Nov 8 2021, 15:22
FC Barcelona
The scale of Barcelona’s injury crisis is revealed with entire XI now out of action
Nov 7 2021, 13:13
FC Barcelona
Ronald Koeman won’t go quietly from Barcelona handing more problems to Joan Laporta
Oct 31 2021, 18:45
FC Barcelona
Video: Falcao continues great scoring run for Rayo with opener against Barcelona
Oct 27 2021, 18:43
FC Barcelona
“You’re an inspiration to us all” – Clubs and players show support for first openly gay footballer Josh Cavallo
Oct 27 2021, 16:37
Liverpool FC