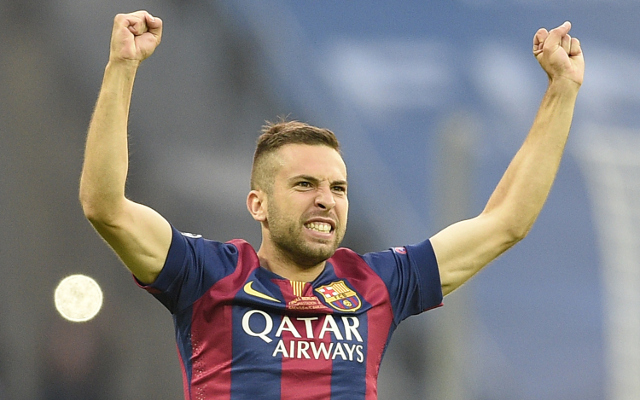 Barcelona defender Jordi Alba reportedly turned down a move to join Manchester United, and it’s fair to say he’s got a good reason behind his decision.

The 28-year-old has established himself as a key figure at the Nou Camp since joining the club from Valencia in 2012, making 208 appearances for the Catalan giants in all competitions.

According to Don Balon, as re-reported by The Express, Man Utd were keen on him this past summer with Jose Mourinho looking to address his issues at left-back with the likes of Luke Shaw, Matteo Darmian and Daley Blind failing to nail down a permanent spot in the line-up.

However, not only did Barcelona coach Ernesto Valverde shut down the possibility of Alba leaving, but it’s added by Don Balon that the Spanish international himself didn’t want to depart as he preferred to continue to ply his trade with Lionel Messi.

It’s noted that the pair enjoy a close relationship and a great chemistry on the pitch, which in turn has been key in helping Barca continue their successful streak of winning trophies in recent years.

With Alba said to be comfortable at the Nou Camp, it’s unlikely that the situation will change and so in turn, Mourinho would be well advised to move on and target another solution instead.

Nevertheless, it’s difficult to argue with Alba’s desire to stay where he is, as who wouldn’t want to train and play alongside Messi week in and week out and continue to win silverware. A fresh challenge may well have been an option, but Valverde’s reliance on him this season will also be a crucial factor, as he’s made 10 appearances already in all competitions.