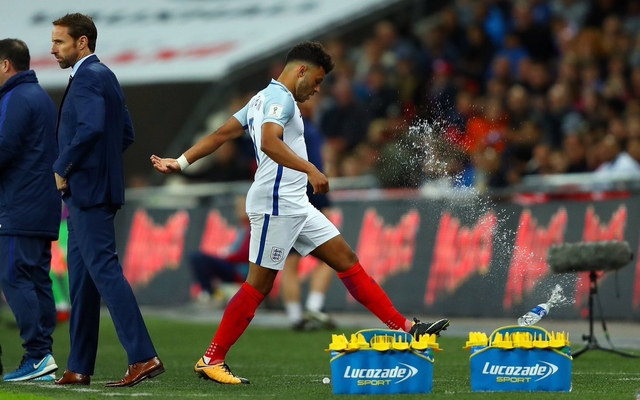 Things just haven’t gone very well for Alex Oxlade-Chamberlain since his summer move to Liverpool, and Arsenal supporters are still letting him know about it.

The 24-year-old completed his £40m move to Anfield at the end of August, as per The Guardian, and not only has he struggled to make a positive impact on an individual level, but Liverpool’s form has dipped ever since as they’ve picked up just one win in their last seven outings.

That’s nothing more than a mere coincidence rather than Oxlade-Chamberlain being solely to blame for it, but it’s given plenty of ammunition to Arsenal supporters, and the general football public and media outlets, to poke fun at him.

It appears as though he’s not even safe on international duty, as after being selected by Gareth Southgate for England in their World Cup qualifier against Slovenia at Wembley on Thursday night, and after putting in another abject performance, he was predictably targeted on social media.

While Oxlade-Chamberlain struggled for consistency throughout his time at Arsenal too, it surely will be a matter of time before he starts to prove his worth at Liverpool. However, for now, his confidence must be taking a battering on and off the pitch.

"Ox leaving the field. He's not had a great month"

*picture cuts to Ox spitting on himself* ? pic.twitter.com/EuPFYdqLGJ

Trying to get all those Ls out of his system. pic.twitter.com/YqxAjdw2fI

Oxlade Chamberlain comes in and suddenly Liverpool are under pressure. Some jokes write themselves. ??

The England game is stopped because there's an intruder on the field. I thought Oxlade-Chamberlain was subbed off.

Oxlade-Chamberlain typifies a huge problem;too many players not having to earn a place in the team once they are part of the scene #ENGSLO

Think the next time Oxlade-Chamberlain gets to play in central midfield will be in the legends’ Soccer Sixes.