It’s going to be the major talking point leading up to the World Cup in Russia next summer, and Sky Sports pundit Paul Merson has got ahead of the queue.

The topic in question is of course England’s squad for the showpiece event next year, as they successfully secured their place in the tournament following a drab win over Slovenia at Wembley on Thursday night.

Debate will rage over who should be on the plane, and Merson is certainly going to split opinion with his inclusions and snubs, but there are naturally some that stand out more so than others.

The former Arsenal ace clearly still has a soft spot for Jack Wilshere, as the Gunners midfielder is included in his 23-man squad despite having only made three appearances so far this season.

Wilshere has struggled with injuries throughout his career which have undoubtedly held him back from fulfilling his full potential, and with his Arsenal contract now running down, this season is crucial for his career.

Evidently, Merson is backing him to enjoy an injury-free campaign and to put in some impressive performances in order to earn his spot in Gareth Southgate’s squad.

Meanwhile, there’s no room for Daniel Sturridge or Nathaniel Clyne. Injuries have been a problem for these two as well, in the latter’s case he has yet to even make an appearance this season and so coupled with Kyle Walker’s form, it’s a no-brainer.

Sturridge continues to fail to deliver consistently for Liverpool, and so it’s no surprise that Merson can’t find room for him even though on his day he can make the difference.

Shockingly, Merse has included Alex Oxlade-Chamberlain, despite the fact that he has struggled badly so far this season since leaving Arsenal for Liverpool.

Again, there is plenty of time between now and the end of the season to change opinion, but the 24-year-old has done very little recently to suggest that he deserves a spot in the final squad.

Other high-profile snubs include Luke Shaw, Jesse Lingard, Theo Walcott and Danny Welbeck, while the Sky Sports pundit wants to see a 3-4-1-2 in the opening game of the tournament.

In his defence, if this line-up can stay fit throughout the campaign and prove their quality, it’s not a bad XI overall. However, it’s England, and so it might be worth not getting too carried away for now even though Walker’s threat on the right, Wilshere and Alli’s creativity in the middle coupled with Marcus Rashford’s pace and Harry Kane’s prolific finishing does sound pretty good on paper. 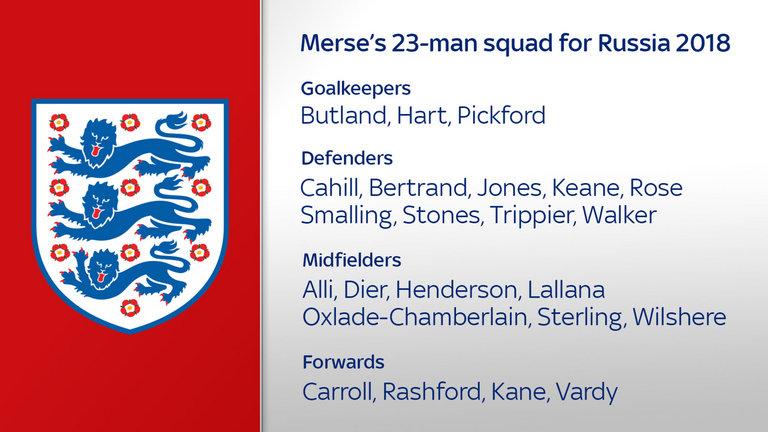