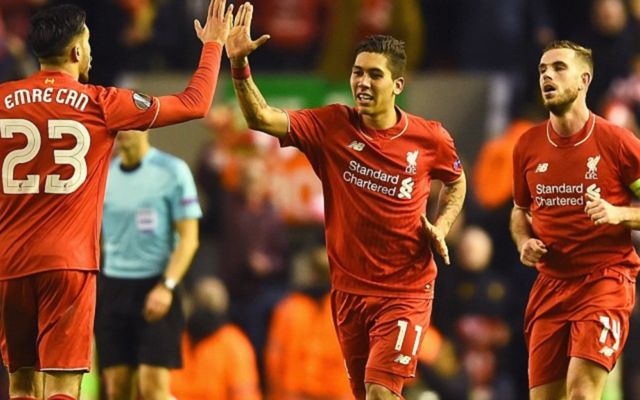 Roberto Firmino is loving life with Liverpool at the moment.

The Brazilian international, who joined the club from Bundesliga side Hoffenheim in 2015, recently made his 100th appearance for the club in the Reds’ match against Spartak Moscow in September.

And the 26-year-old has revealed his feelings on the club and his time so far with them, telling Liverpool’s official website that he is ‘very happy’ at Anfield.

Firmino also added that he ‘never thought twice about coming to Liverpool. It’s a very good club, at a very high level.’

The Liverpool forward went on to say: ‘I hope I can get another 100 games for Liverpool and to achieve a lot of good things; to win as many trophies as possible and achieve success.’

Firmino has had a successful career for Liverpool so far, with the forward managing to accumulate 27 goals and 25 assists in 101 games so far, meaning he contributes to a goal every other game.

The 26-year-old has had an average start to the season for Liverpool this year, with the Brazil international only managing to bag two goals and two assists in his seven league appearances for Jurgen Klopp’s side.

Should Firmino do as well in his next 100 games for Liverpool as he has done for the previous 100, he’ll surely see himself become a fan favourite at Anfield in no time.