Arsenal conceded a Tom Cleverley goal in the 92nd minute as the Gunners threw away a 1-0 lead to lose 2-1 to Watford at Vicarage Road this evening.

Arsenal took the lead in the first half from a Per Mertesacker goal, however goals from Troy Deeney and Cleverley saw the Hornets come from behind to condemn the Gunners to their first loss in eight games.

The results now sees Watford rise into the top four, whilst Arsene Wenger’s side remain in sixth.

Cech had a fairly average game, as the Gunners shot-stopper didn’t have much to do apart from pick the ball out of the net.

Despite the result, the Frenchman had a solid game at the back for the away side. Koscielny rarely put a foot wrong and was dominant in the air.

The German international was Arsenal’s best player today. He took his goal very well and was unfortunate to see his excellent block from Deeney fall to Cleverley right at the end. 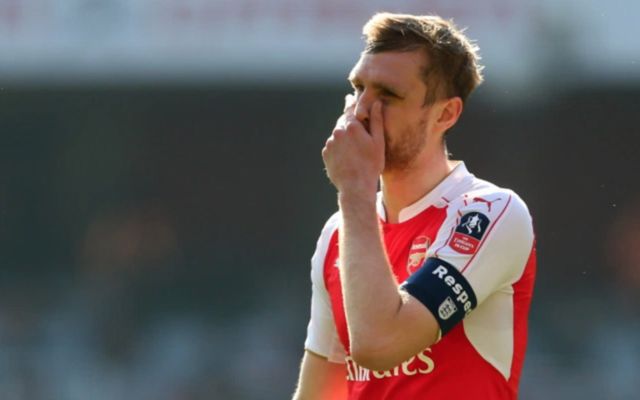 An average performance from the former Malaga player, didn’t really have a lot to do and really didn’t do a lot to benefit his side.

The La Masia graduate, similarly to Monreal, didn’t have a lot to do the entire game, lost the ball a fair few times but is always a threat going forward.

Arsenal’s summer signing had a poor game today, the Bosnian often misplaced his passes and lost the ball a fair amount of times.

Elneny, like most of his Arsenal teammates, had an average game. The Egyptian didn’t really do anything of note and Gunners fans would’ve probably liked to see him contribute more.

Xhaka played well throughout tonight. His delivery from set pieces was good and his assist for Arsenal’s goal was superb.

Welbeck’s performance didn’t really have an outcome on the final result. The former Man United man lost the ball a fair amount of times and failed to registered a shot of any sort the entire match.

Arsenal’s Nigerian forward failed to make any impact on the game at all, and really struggled to find his feet during the game.

Arsenal fans would’ve expected more from their club record signing this evening, as the Frenchman failed to register a shot on goal during the match.

Olivier Giroud – 6 – failed to make an impact off the bench and didn’t really change the game at all.

Mesut Ozil – 6 – Arsenal’s German talisman is reportedly after a new contract, but this cameo off the bench wouldn’t have done the midfielder any favours as he failed to change the game.