The Daily Mail are reporting that midfield general N’Golo Kante could miss the Blues’ next seven games, which would come as a massive blow for Antonio Conte’s side.

The news outlet are also reporting that the midfielder will miss his side’s Champions League double header against Serie A side Roma, with it remaining to be seen whether Kante will be available for selection for Chelsea’s match against Manchester United at the start of November. 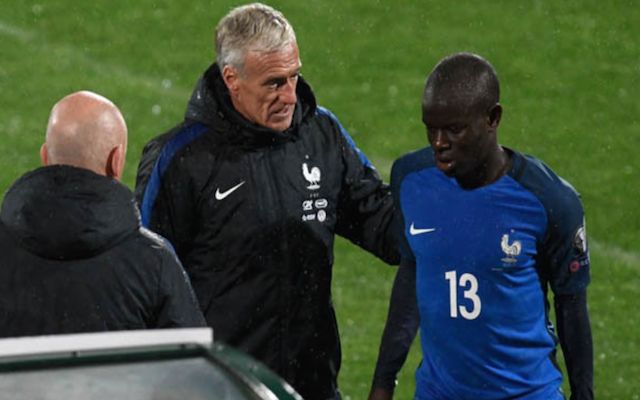 Kante picked up the injury whilst playing for France against Bulgaria in Les Blues’ World Cup Qualifying match earlier this month.

The former Leicester man is yet to make an appearance since being subbed off for his national side, and his injury could come as a massive blow for Chelsea, who rely on the player’s physical prowess and ability to read the game in order to give themselves an edge over their opponents.

Kante joined Antonio Conte at Chelsea last summer, and the Frenchman has impressed thoroughly during his time at Stamford Bridge.

The midfield general became just the second player to win the Premier League in consecutive seasons with two different clubs last year, as Chelsea won their fifth league title since 2004.

The France international first came to prominence during Leicester’s miraculous title winning season, with the player making the PFA Team of the Season.

Should Kante end up missing the United game, it’ll obviously come as a huge loss for the Blues, who will look to somehow fill the void the midfielder has left during his absence.