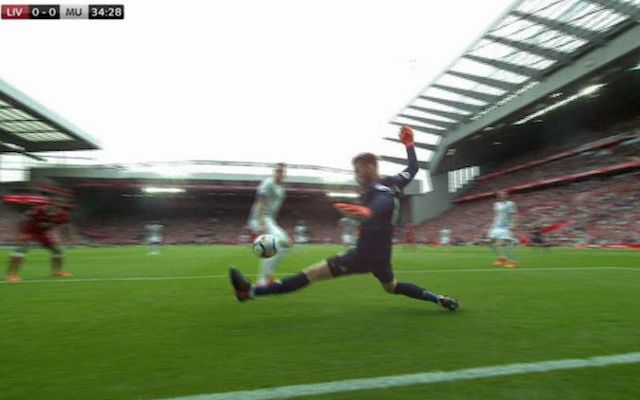 David De Gea made an outstanding save in the first half of today’s crucial Premier League fixture against Liverpool at Anfield to keep the scoreline 0-0. The Spanish number one had fans in awe with one of the best saves of the season.

On the 34th minute mark Brazilian Robert Firmino was released down the left flank and managed to find some space on the byline to cut a perfectly placed ball reversed into the path of Liverpool defender Joel Matip.

Matip was no further than three yards from goal and was in a position where he couldn’t afford to miss. The defender’s right-footed shot however was saved by an outstretched leg from United ‘keeper De Gea. A subsequent rebound was then put wide by Liverpool winger Mohammed Salah.

Below you can watch the outstanding save from De Gea. You won’t be the only person who will need a few minutes to marvel in the brilliance of the United shot-stopper. The Spaniard is undoubtedly one of the best goalkeepers in world right now and this save is just another example of his magical brilliance.

WATCH: What a save from @D_DeGea to deny Matip from close range! Live on SkySportsPL: https://t.co/C9Q6qNTiR0 https://t.co/zkijrEJOrZ

Fans, players and pundits all reacted online to the excellence of the United keeper.

WHAT. A. SAVE from De Gea! The toes of justice #LIVMAN

De Gea makes a truly world class save. In other news, water is wet. #BestKeeperInTheWorld ????

OMFG HOW DID WE NOT SCORE WHAT A SAVE DE GEA

David de Gea ?, currently the best goalkeeper in the world. What a SAVE from Matips close-range effort to keep the score level at halftime.

De Gea is so good he could save a marriage #degea